Let’s get one thing out of the way: the play is aptly named. Coming in at around 3 hours 25 minutes it’s a classic marathon of a play. And actually I loved it for that.

I’m all for a short play. The phrase ’90 minutes straight through’ often fills me with delight. Years as an usher have conditioned me to dance with joy at a 2 hour piece. However there is something to be said for remembering the art of the long play-and the joy as an audience member this can bring. It was really enjoyable actually to sit and be swallowed into that world for over 3 hours yesterday. To be forced to have the patience to wait for the story to unravel. This from someone who never has the patience for a film over two hours long, there is something brilliantly engaging about being held in that space for so long, engaged by O’Neill’s compelling writing and in this case equally compelling performances.

I confess also that the chance to see Jeremy Irons perform was high on my list of reasons for this-quickly followed by a chance to see the marvellous Hadley Fraser. And a chance to go to the brilliant Bristol Old Vic-a theatre that is in my ‘neighbourhood’ being just an hour away, but one I rarely visit. And while we’re at it, this and much of the Old Vic and Bristol theatre scene (as well as my own native Cardiff) is proof irrefutable that there is theatre worth seeing outside the M25, something several London theatre critics should take note of. But I digress, that’s another post (and believe me one that’s coming soon). Bristol Old Vic manages to walk a line between great classic repertoire and new work and in this production Richard Eyre manages to make a classic still feel fresh. 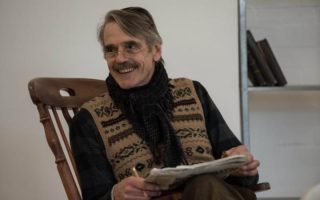 And as much as yes it is still a long play it actually moves at breakneck speed in Eyre’s production. The dialogue spills and overlaps and the musical repetition of O’Neill’s words only seems to add to this pace. Indeed at the performance I attend which had a BSL interpreter I felt for her greatly in attempting to keep up with the pace (which she of course did admirably). The cast rise to this challenge brilliantly delivering the relentless pace in both word and deed-a few stumbles here and there but ones easily forgiven against the backdrop of such performances.

It is Lesley Manville’s unravelling as Mary Tyrone that is the emotional heart of the piece, and it is executed with painful brutality and honesty by Manville. Her anxiety and turmoil are evident from the opening scene and as she spirals towards the seemingly inevitable conclusion it is a heartbreaking shift and disintegration of the woman glimpsed briefly in the opening scenes. Eyre’s direction brings out just how drawn around their mother’s illness the family life has been, as the darkness of all the family comes to the surface. 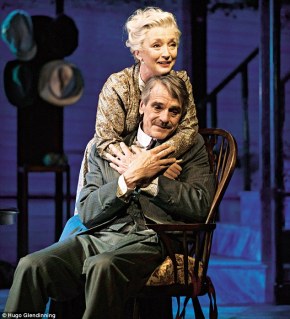 Leading the Tyrone family, with predictable charm and gravitas is Jeremy Irons. As Mary says in the play ‘If you think he’s handsome now’ reminding us of the handsome younger Irons as much as her husband-the actor having lost nothing of his charm either, and although changed with age not so much that the handsome younger man remains. It is of course for Irons something of a ‘haunted’ play-the actor in O’Neill’s narrative recounting his youth as an actor, as Irons performs this on the stage where he got his start. It’s a part he serves well, the balance of charm and darker malice of James Tyrone, the dark dangerous edge of his drunkenness coming finally to rest on his outburst at older son James. It’s a measured and layered performance that helps drive the play onwards, and delves into it’s darker edges.

Playing against their parents are sons Jamie and Eugene (Hadley Fraser and Billy Howle). Fraser is utterly engaging and somewhat endearing as Jamie, the much criticised older son who has followed a little too closely in his father’s footsteps. He is darkly funny and charming throughout, even in the face of much of the conflict. This makes his final unravelling and honest speech to Eugene all the more moving. And as Mary finally reveals how far out she has spun this time Fraser’s reactions as Jamie are heartbreaking to watch. Meanwhile young actor Howle as Eugene gives a touching performance as the younger Tyrone suffering from consumption and wondering what his future might hold. Howle gives great depths to Eugene’s character and is engaging throughout even up against the far bigger characters and actors on stage.

This production brings out expertly all of O’Neill’s key elements-the darkness of the individual characters and their various downward spirals, and the dynamics of the family. The great tragic line at the end of the play;

‘Yes, I remember. I fell in love with James Tyrone and was so happy for a time’

Delivers a full emotional punch-the tragedy for both Mary and the family around her. O’Neill never gives us answers within the play of course, but it’s also it’s beauty that even after nearly 4 hours, Eyre and his production leaves us wanting to still know more about the Tyrones. To bring that out in such a well known, well worn narrative is testament to the power of these performances.