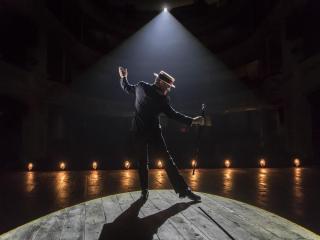 *Disclaimer, I saw this while it was still in previews so this review comes with the caveat that it was not the offcial finished product.

The Brannagh season at the Garrick comes to a close in style with John Osbourne’s classic ‘The Entertainer’. When curating the season it seems a fitting finale for Kenneth Brannagh, who takes on the fading song and dance man Archie Rice.

Osborne’s play is a dual reflection on the demise of the Music Hall and the demise of Empire, with the Suez crisis as a backdrop to the ailing career of Rice. It is on one hand a fascinating insight, and look back, on the other elements of it don’t quite hit the right notes any more.

Osborne’s men in general, where once rang fresh and new, sometimes feel hollow, self involved and of their time and misogynistic. This is no reason to stop reviving these plays, they are still important works with much to think about, even if with time the things we think of when watching Osborne shift from the anger of the angry young (and older in this case) men, to also as an audience passing our judgement on these men, and their rage. The Entertainer is a fascinating reflection back on a moment in entertainment history and political history.

Brannagh himself is as masterful and charming as you’re expect. However his Archie is at once too talented-Brannagh’s own tap dancing is exact and with flair-and also a little too ‘dead behind the eyes’. The latter is clearly a choice, his Archie goes through the motions, unenthused and ticking boxes. This jars with the dialogue and Osborne’s crafting of the character- nobody would go on that long, and fight that hard if there wasn’t still a sliver of love there somewhere. However the Music Hall routines are entertaining, pitch perfect in their hark back to that era. Brannagh is, as a dancer exacting, his singing channelling the era, his jokes likewise and delivered with panache. One odd element, with the hair, the makeup and the accent he uses Brannagh seems to also channel Eddie Izzard in look and demeanour, which while might not be what Osborne ever imagined works incredibly well.

The transitions from the Music Hall to the domestic in this production are sometimes awkward, director Rob Ashford seeming unsure how to move between or meld the worlds. In these scenes we meet the rest of the Rice family, although the writing is such that for the first half the unobservant audience member (as I was in this weekend’s London heat) might miss the key details of the family relationships.

Among the Rice family Gawn Grainger-a later addition to the cast due to John Hurt needing to step down-is a standout as the angry patiriarch Billy Rice. His rants about Poles and male Ballet Dancers ring as familiar today from those of certain demographics. His anger and passion for both the Empire and a time already lost, cuts through the supposed anger of the younger generation. With Sophie McShera’s Jean Rice painted as passionate and principled but coming over a little one note and reserved. Greta Scacchi as Archie’s second wife Phoebe brings the most nuanced and passionate performance. A real sense of her frustration at the way her life has turned out, and the conflicting love for Archie and her hatred for the things he puts her through is conveyed.

Somewhere the link between Empire and Music Hall feels a little lost. Whether it’s through this production that struggles at times to bring together the home and stage world, or whether it’s simply the passing of time and the dating of the play that loses this element is unclear. However the strong political themes you feel are running under the narrative, never quite leap to the fore as they perhaps should. However it is a solid engaging production of a classic and still important play.

If you end up sitting next to a member of the older generation they may tell you tales of Olivier being masterful in the role in the 60s. Others may also remember Robert Lindsay’s turn as Archie at the Old Vic more recently. Both were masters of their craft and their takes were no doubt equally masterful. Brannagh likewise delivers, just as you might expect him to, and it’s a fitting curtain call for his own season at the Garrick.