I had to do a Kushner and give this post a long subtitle.

When I called my PhD thesis “Angels at the National” (I write terrible titles I know) I never thought I’d be able to say it again. Of course, the Gods like to have a laugh at my expense so mere months after I bound the copy, Rufus Norris and Marianne Elliot got together and decided that I clearly hadn’t had enough to write about.

But how does it feel to have the thing that has lived in your head for so long, back, brought to life in front of you? As much as I love the plays, I’m also conditioned to be hyper critical. I know every line (I amazed/freaked out Elliot herself with my ability to know exact quotations on demand). And of course, I have my own expectations about how it should be. How then would it feel to go back? 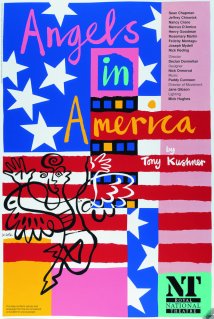 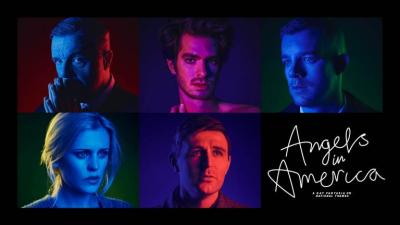 At the end of Part 1 I found myself leaning on the railings by the Thames, trying to compose myself and my thoughts enough to move. At the end of Part 2, I’m sure I had forgotten how to breathe for a while. And still I can’t quite wrap my head around it all.
The last half an hour before curtain felt almost physically painful (not unlike the Lyttleton’s seats after nearly 8 hours…) Having waited nearly ten years since the last time, and after a year of build up knowing that this was happening, the last 30 minutes were too much. There is an energy to the NT foyer I don’t think I’ve ever felt.
There was a breathing of a familiar sigh of relief as the first two scenes unfolded- as Rabbi Isidor Chelmwitz reflects on Jewish journeys, and then as Nathan Lane took the reigns as Roy. That Roy scene fits easily with his comedy chops and the audience was eating out of his hand within seconds. The next scene would clinch it for me- Prior and Louis for the first time- so much hinges on this. But with the immortal line ‘Cousin Doris is a dyke’ a feel a sense of relief, it works. I always have to love Louis, which possibly says things about my own romantic leanings and shortcoming that are best not to go into, and I do, immediately and fully (I mean, that it’s James McArdle helps obviously). McArdle isn’t the ‘typical’ Louis, but as soon becomes, Elliot has littered this production with little ‘not quite typical’ details that add up to something else entirely. 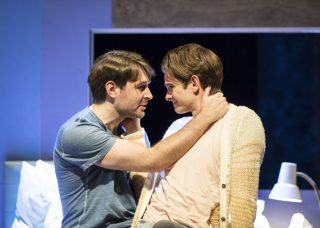 Almost too soon it’s the first interval, things feel like they’re already progressing at breakneck speed. Anyone afraid of the running time should surely see by now that the 7 hours in practice feel like far less when it’s going right.  Act 2 is where it starts to get serious. And the realism of the opening scene is like a slap across the face. And I’m reminded why I love this play so very much, that lurching from laughter to tears to sheer emotional gut-punch within moments. That’s the genius of Kushner’s writing and that’s what Elliot is doing so well here- pulling out those elements and taking them to their extremes while still managing to make it feel perfectly natural.

By interval two I’m aware I’m just smiling, elated, this feels like flying. So badly I wanted it to be good but I was scared to put too much expectation on it. What if it wasn’t, what if also, after all this time, this investment, I no longer love it? But it’s pure theatrical joy, a combination of exactly what I wanted and what I never expected- lines I thought I knew completely turned on their head and completely perfect. One moment I’m so glad was just as I expected, and hoped was the scene, set to Moon River, where Louis and Prior dance. Amid everything else, the information overload, the comedy, the politics, that moment is pure romance and tragedy and beautiful. Kushner’s stage direction for that scene reads ‘Louis appears. He looks gorgeous’. He does, and two bars in I was a goner. A building of comedy, realism and enough political points to keep a debate going for the entire break between parts had built part 1 into exactly what I’d expected, and hoped.
And then, The Angel appeared.
I know this play. I know virtually every production that’s been performed. I know that Angel. I know how she arrives. I know how she moves, what she looks like. I know her.
I don’t know her. For the first time, ever in the theatre my mouth was open in surprise and shock. I’d give Part 1 a standing ovation for the last minute alone. On paper, it almost shouldn’t work. But it does. 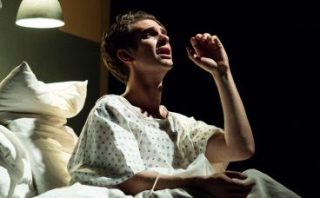 Stumbling out into the sunshine after Part 1 feels strange, and I end up stumbling towards the river and standing for a while. Looking across the river at the University building where I first started studying this play. On the ‘break’ even away from the building itself people were talking about Angels, catching snippets of excited conversation, from those who knew the plays and those who didn’t was fascinating, and it felt like being a part of something. To share this thing, I love so much with people again, in real time, experiencing it again. As I eavesdropped shamelessly I was also conscious of seeing people reading the programme- because I wrote an article for it, and it was both surreal and a little overwhelming to think I’d written something people around me were reading. That so many people across the run might read. And for me, as someone who spent so long with my head in this play, someone who used the programmes from the original as a window to that past production, to now have something I wrote in the programme for this one, was something special. 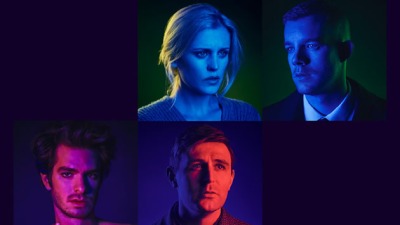 Part 2. The sprawling messy Perestroika. (you’d think by now I could spell Perestroika without checking, you’d be wrong). To this point, I was happy, I was shaken. I was in love all over again. But, once I’d stepped back, had time to reflect, if it was just part 1 I was seeing. I’d have questions, I’d have critiques, there were things I wasn’t sure about. I was soon to learn a lesson: Elliot knew damn well what she was doing, and what she was doing we shouldn’t forget was not directing two plays but directing two parts. And there’s a difference. And in seeing Part 2 all became clear.
Angels is both one play in two parts and two separate plays, symbiotic but distinct. Perestroika is a theatrical piece, but not without its moments of honest emotional realism, and that is the gift that is this piece.  And the direction, more and more experimental, abstract is a gift to it. This was also the first time seeing the (considerable) revisions to the text as well and it was exciting to feel like discovering parts of the play for the first time again- being at once incredibly conscious of the differences but also feeling like they were just right. Alongside that is just what Elliot did to the play. That is a director that at once understands fully the essence of what Kushner was writing, but also not afraid to pull it through her own interpretation and pull it out the other side.
This isn’t a review, so the specifics are for another day. But it was subtle and not subtle at once. But to two people I mentioned a rain machine, and we all three got over excited. It’s a messy, magical truly epic ride of sheer theatricality. But we end on a virtually empty stage. And once again it’s hard to breathe.
It’s hard to explain, just how engrained these plays are in my consciousness. Kushner’s words run through my head, almost my veins on a virtually daily basis. And I don’t just mean my habit of shouting ‘Fuck you I’m a prophet!’ at people who piss me off. Over the last 10 years or so, those words have become a part of me. The real Bethesda Fountain, where they play ends, is Prior’s favourite place in the Universe. It’s mine too. I started going there because of this play, but it’s taken on meaning beyond that. It was a pilgrimage after I finished my PhD, it was a place myself and my long-distance friend and ‘brain twin’ had to go and sit together. I’ve gone back so many times, over so many years, and I recite Prior’s words to myself there. And it’s back, on stage where it all started in front of me again. And the words of the Epilogue, and indeed Prior’s invocation to the Angels, these are words I’ve absorbed, words I’ve taken on separate from the play. I knew hearing them again would be emotional, but it also felt like coming home. 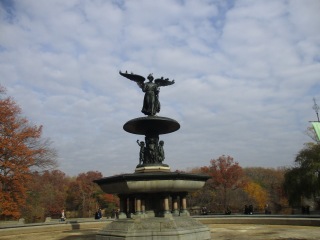 The play ends on a quiet note, with that simple address to the audience ‘The Great Work Begins’. The lights go down and before they have chance to come up again the audience erupts. On their feet before the lights come up, and in London, like Prior we are ‘slow to rise’ particularly play audiences. I’ve never seen or heard anything quite like it. And for me that was something too, a moment of ‘It’s not just me, it’s really not just me, that was magical’.
It’s been more than 24 hours now, and I’m still not entirely sure how to process it all. What I do know is that, once again Angels, Kushner’s work came back to me when I needed it. This play changes people, and coming home to my ‘Favourite place in the Universe, the parts of it I have seen’ has changed me, even after all this time.
So, once again The Great Work Begins.