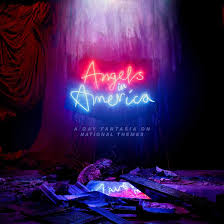 So it’s official that the Angels are flying back to America.

Admittedly it was a fairly well known ‘secret’ and admittedly I knew some weeks ago. On one hand that’s what made it easier for me to say ‘I’m fine really’ once Angels closed- knowing it wasn’t a real ‘goodbye’ just ‘farewell’.

Why then am I so emotional about this today?

Well firstly, in all honesty it’s been a hard week. It’s the first week I’ve been both jobless and Angels-less. And it all finally caught up with me.

So what does it mean really to fly home to Broadway? well for me the NT revival was always the big one. That was ‘home’ for ‘my’ Angels. I’ve always been pretty nerdy about the fact the technical world premiere of the whole thing was there.

But now, for a British director and (largely) British cast to take that most American of plays back home. That takes some chutzpah- in a really good way. Because America has done productions, in fact it’s almost continually doing them. We do them about every 10 years. And this was the big one- this was the Anniversary one that nearly wasn’t at the NT (it was nearly at the Old Vic fact fans, until Mr Spacey had a change of heart, and thank God he did- just to have it back ‘home’). It was lifting it out of the Cottesloe and throwing it on the biggest stage the NT has, and one of the most difficult stages in London. It was throwing a few actors that had a lot of people scratching their heads about both individually and as a group and going ‘look what they can do’. It was directed by a woman- something we don’t seem to make much fuss about but really really should. Because as a woman who has worked on this play for a long time too, you get a lot of funny looks and a lot of Men telling you that it’s not your place.

Maybe it wasn’t perfect, not for everyone, but it was everything and anniversary production (official or otherwise) should be- it was breaking the mould and rebuilding. And it was big and bold and beautiful, and all the theatrical magic that Kushner wrote in.

And I’m proud you know? I’m proud of that collection of actors, designers, Stage management and everyone else at the NT who brought this beast back to life. Because while it’s just another play, it’s not just another play. It’s one of those rare and special plays, that deserves a rare and special production. So I say take it out there with pride not to show America ‘how it’s done’ just to show them what you can do.

And there’s a wonderful cyclical nature to it all. That the NT was so intrinsic in giving the original production life, that it should be a part of giving it ‘More Life’ on Broadway.

And for me? well as I said previously, in my long ramble about what all this means to me (here) this will always be “my” production. The one that left it’s mark on my heart. I loved this play with all of my head before this, but this production made it a part of me again. I fell in love with theatre as a Broadway fan girl, I grew up dreaming of The Great White way and the romance and magic of those theatres. It started friendships and a life long pastime with my Mum. Only yesterday Mum said to me ‘I don’t care how we do it but we’ll make it there (to NY) for Angels’. And that’s really the marker of all this- theatre, going to New York, and the PhD have been a family affair for so long, and Angels being tied up in so much New York mythology for me- for us- has been part of that. All of which me to a PhD, which led me to all this.

I’d be so happy for any production in New York, but to ‘fly’ it ‘home’ with this production so dear to my heart and that made such an impact, that’s something important.  So in just under a year’s time, when it really is ‘Goodbye’ on Broadway, that feels like a right ending for me.