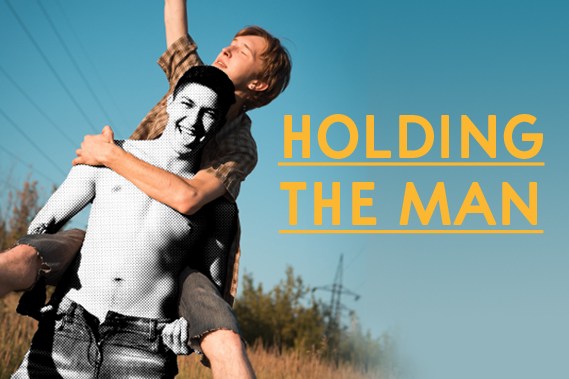 This isn’t a ‘review’ because I saw this too close to the end of the run, but some plays make you want to put pen to paper regardless. It’s also not a review, as this is filled with the kind of personal anecdotal nonsense that people tell me doesn’t belong in my blog.

Well screw that, this is my blog, and for this one I’m writing it how I’d like.

A little background. For anyone who doesn’t know me, I wrote my PhD in what essentially translates to ‘Plays about AIDS’. There’s a far more sophisticated description. But for the purposes of today, that about covers it. For anyone who wants more of that nonsense, my side blog is here

I started my PhD in September 2010. In June 2010 (June 21st, I looked it up. Yes I keep a list) I saw ‘Holding the Man’ for the first time. I actually had no idea what it was about going in, I was actually just a bit obsessed with Simon Burke at the time so booked to see him (what of it?). And so by accident as a little pre-term treat to myself I booked the ‘Australian AIDS play’. I loved it. I laughed. I cried. It became one of my favourite plays of the ‘genre’ (for want of a better word) that I was studying. I read the play and the book over and over during my PhD. Both became a sort of ‘retreat’ from the other work I was doing. They became along with a few other things- the writings of Tim Miller for one, a place to be reminded about why I was doing what I was doing. I was never allowed to write about the play in my research. The narrow minded view of my PhD supervisors had no place for British plays, let alone Australian ones. (But she also had no place for War Horse, so she’s basically dead inside).

So now, two years out of the PhD, and in a new kind of research hell (hello book attempts) it felt like a great time to revisit this play. And the team at Above the Stag have done a wonderful job. It’s the perfect kind of venue, and perfect team for this play, the intimate setting really lets the actors hit home the powerful story. And the minimal (but visually stunning) backdrop lets the story shine through.

Holding the Man begins as a story about two young men in school, discovering their sexuality and each other. Based on Timothy Conigrave’s memoir of the same name, about him and his love John Caleo. The title is a great play on a term from Aussie Rules Football, which John plays in school and college- it’s an offence that incurs penalty. In Conigrave/Murphy’s writing of the story, the penalty for ‘Holding the Man’ ends up being severe indeed.

The actors playing Tim (Jamie Barnard) and John (Ben Boskovic) have the added challenge of playing the boys from early teens up to their 30s. And both take us from wide eyed teenage innocence through struggles in their 20s, through to the anguish that comes with their AIDS diagnosis. Barnard as Tim narrates the story, addressing the audience sporadically throughout the play, and his easy charm draws the audience in. There’s a great chemistry with Boskovic, who plays the at first hesitant John with an endearing charm. Both actors are funny and charming an make you fall in love with them, and their relationship. The first half of the play is funny and sweet as they discover each other at school, fall for each other and then struggle with life outside their high school bubble. Both play the conflict with a real honesty that cuts to the heart of how first love can be both intoxicating and soul destroying.

Around Barnard and Boskovic are a brilliant ensemble who create the rest of Tim and John’s world. The structure of Murphy’s play is beautifully theatrical, with actors doubling across multiple roles as friends, parents and other lovers. This adds some fantastic moments of comedy with Robert Thompson and Annabel Pemberton in particular offering some hilarious moments as supporting characters. As the set- David Shields’ beautiful neon backdrops, combined with a series of function black panels and boxes, allows the story to move from year to year, and city to city, the backdrop of characters form Tim and John’s life in the 80s and early 90s.

Of course life takes a darker turn. We start hearing about AIDS before the characters encounter it. But ultimately we see their diagnosis. Murphy’s script cleverly takes us away from the logistics of medical elements- though these are there- and keeps things firmly rooted in the emotional, psychological elements that surround that diagnosis. The mysteries of the late 80s and all the questions sill unanswerable, all the ones nobody wanted to know in a way-who infected who and when. There are some wonderful moments of staging and dramatic writing around this. When Tim hears elements of his play, inter-cut with his own medical diagnosis is a hard hitting but beautiful way to convey the feelings of confusion, and the very real medical impact he was suffering. The play-within-a-play is a nice reference to the use of theatre as a response, and a nod to the more ‘worthy’ plays that often sprang up.

Ultimately this play rests on the central performances of Barnard and Boskovic. And as the play moves towards it’s inevitable conclusion, both of them deliver. Boskovic in particular shines in the scene where he confesses what he wished he’d done in life. The sense of quiet resignation and regret is heartbreaking to watch. And Barnard gets the tough job of delivering Tim’s final monologue directly after John dies. The final words ‘A gift to John. The End.’ he delivers with such sweetness and vulnerability, that I defy anyone in the audience to hold it together at that point. 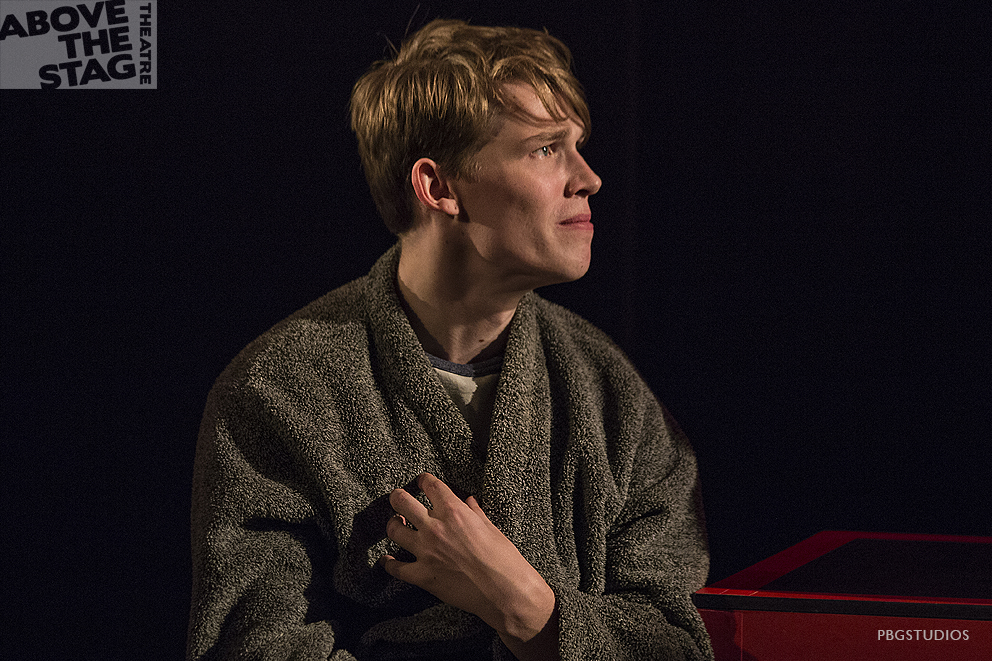 And yes for me, Holding the Man proved a highly emotional, but also cathartic experience. Having spent the summer with ‘the other AIDS play’ one I have a complex emotional relationship with, and that moves and affects me in different ways. The outright emotional impact of Holding the Man is actually really refreshing. And that has in part always been the appeal of this play. For me Holding the Man, the play and Timothy Conigrave’s original book, were a refreshing voice in the predominantly American dialogue on HIV/AIDS. Britain has a few voices in this- the equally refreshing and incredibly British ‘My Night With Reg’ springs to mind as a comparable example. What I loved about Holding the Man was the refreshing humour of the piece. Not just in the early scenes when ‘everything is fine’ but right to the end, a darker humour admittedly but still there. It’s not holier than thou. It even makes a slight wink at the more ‘worthy’ AIDS plays within the narrative. but also it’s an AIDS play that isn’t just an AIDS play. Really it’s a coming-of-age story, albeit one with a really tragic ending.

But what Holding the Man does so well is give over to simplicity. It’s important that we had the political plays, the ones that shouted at the leaders failing to lead. But ultimately, what they were shouting about was people. Holding the Man gives us that powerful, personal story, and it’s one that will still break your heart. And I think in all the noise, in all the career panic, in the publish the book anguish, once again I’d lost sight of some of the reasons I’d been doing what I’d been doing. And in a weekend where I saw one of the ‘hot tickets’ in the West End that left me cold and bored (and my arse numb) it was so refreshing to see a company that clearly put its heart and soul into a ply.

I’m glad I came back to this play. It has a way of finding me when I needed it. Back in 2010 it spurred me on gave me something at first new to inspire me, and then a fall back to remind me of what drove me. In 2017, this wonderful cast in the tiny theatre under the arches gave me that again. I had a damn good cry, left the theatre and picked myself back up again. Because there’s something really inspiring about Conigrave’s story. That fight right to the end, the book as a gift to John, and the legacy that lives on.

One detail I left out. This whole PhD madness started in a way, with Hugh Jackman in ‘The Boy from Oz’. From that musical I started reading around plays about HIV/AIDS. And it led me all this way. In Act 1, this production used Peter Allen’s music. I’m not one to believe in signs usually, but maybe somewhere someone is telling me keep going.