Skip to content
It’s 25 years since the Angel first flew at the Mark Taper Forum so this is blog 1 of 2 on ‘Angels and me’ of sorts to ‘celebrate’
Two years ago this week I was doing this:
As the caption says, I’d always sworn that once the PhD was done and dusted I was going to that Angel to mark it somehow. (I still kind of wish I’d thrown the whole damn thing in there). And while that milestone was important to me, it also brings up some important things related to location, and physical attachment to the play. It wasn’t just that I’d finished, but I marked that by interacting with the ‘real world’ part of the fictional world my head lived in for so long. And what’s more it’s a place I keep going back to, keep re-enacting that physical expression of the fictional.

“It’s my favourite place in New York City, no in the whole Universe. The parts of it I have seen.”
Prior says in the Epilogue. And the same is true of me. It is my favourite place in New York, and one of my favourite places in the world. It’s odd for me when people associate the fountain with other things. From the annoying- when people say it’s the ‘Friends’ fountain, to the casual ‘Isn’t it like in The Avengers or something?’. I’m protective, it’s ‘my’ fountain. And only because of this play.
I went back there after I finished my PhD, a sort of academic pilgrimage to the only real-world thing I can hang off. I also went there with my ‘brain twin’ in a rare New York moment together, to share the place that we both have the same level of nerd-love for. I don’t know if I can explain it to anyone who doesn’t share such a strong love for a piece of work- the need to tread in the footsteps of fictional characters- but it’s a real and powerful one. For me it’s not unique to this play, but this play is a particularly powerful one. I love to nerd about locations- heck I basically live inside the locations of Doctor Whoand Sherlock for a start (I live in Cardiff for those who don’t know) I love to see the ‘real’ places from fiction I love. For that other great theatrical love Rent I remember talking a few years back about how most of those places are gone now-which is very New York of it- but even last November, walking through the East Village there’s a powerful, somewhat intangible connection to the thing you love. 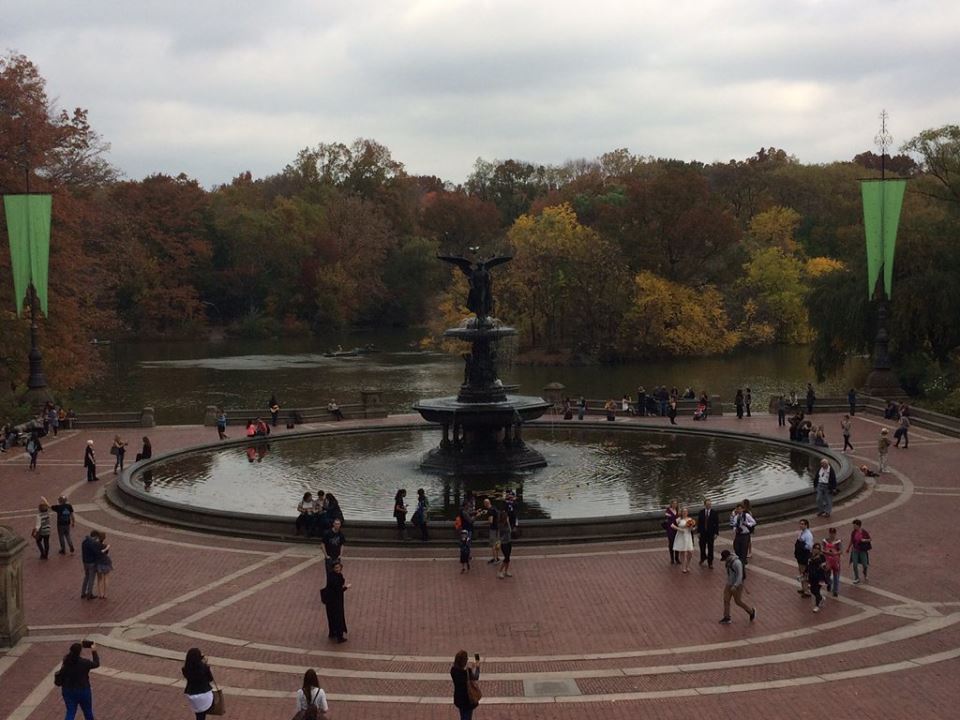 I wrote in one of my review blogs earlier this summer that while as Marianne Elliott described it to me the audience are at once ‘in the Lyttleton and in Central Park’ I find myself frequently, in Central Park and in the pages of that play, or in a theatre somewhere else at the same time. It works both ways. The ghosts of the play come with me to the park- I feel Prior, Louis, Hannah and Belize there with me, in the same way I feel the park around me when I watch the play. And as I am drawn back to the play time and time again, I’m also drawn back to that place, and others like it.
I think for Angel,that fountain, that place is so iconic, and so representative of the play , it’s  hard not to feel a pull back there. What do I feel when I go there? Largely a sense of peace, of clarity. It’s ritualistic- if I walk down the steps I greet her as Prior does in the film, and if I can’t sit at the front as Hannah does in the film, I get grumpy. But it’s also just the reassurance, the presence of ‘her’. Prior’s description that they’re made of ‘the heaviest materials on earth’ has a certain reassuring quality to it. But the ‘winged’ element is the hope. I don’t visit the Angel because she’s an Angel, but she gives me that same kind of hopeful, optimistic reassurance I think Prior seeks in the play. And of course, she gives me that because Prior seeks it in the play. It’s cyclical, and beautiful and admittedly slightly odd. But it’s powerfully emotive, as a writer, and ‘scholar’ of fiction to have a real-world place to hang your (metaphorical) hat.
On a related note, I went back inside the National Theatre for the first time since it ended last week- it wasn’t an intentional long lapse in visits, more coincidental. And I sat, through force of habit, in two of the foyer ‘hiding places’ I sheltered in across 4 sets of 4 intervals in the run. And the building is different because it’s always changing with the shows in there (and alas the lovely neon is gone). But it’s still the same building, and it’s still forever ‘the space’ where for me (and others) something special happened. The idea of theatrical ‘ghosts’ or the legacy of the productions there isn’t anything new (Marvin Carlson and Richard Schechner’s work both touches on this) but it’s both a lovely and peculiar thing to have. For the longest time the NT was a kind of ‘theoretical’ ghost to me- a place that housed this play long ago that I could only imagine when walking around the Cottesloe for example. Now every time I set foot in the Lyttleton, it’s there still lurking around the periphery. It’s not the only production to leave its mark- I’ve yet to set foot back in the Nederlander in New York since Rent left many years ago, but even walking down that street evokes such powerful memories- I still ‘see’ the street as it was, at the height of those days. And the same with the NT, when something creates such powerful memories, they’re forever just beneath the surface inside that building.
Next Summer, I will go to the fountain in the morning and then go to spend the day in the theatre with Angels. It’s peak nerd level granted, but both the physical building the play is in, and the real-world locations have equal resonance. Both have something more ‘intangible’ though than the academic interest or a nerdy completion urge. There’s something about, when a thing becomes so much a part of ‘you’ but is so intangible- it’s a play, it’s transient, it doesn’t ‘exist’ outside of four walls and a fixed period, there’s a need to find something to ground it in. So I’ll keep visiting “my” Angel, because despite the world’s ‘Constant Historical Progress’ and however far my world ‘Spins’ from Angels I know I’ll always be drawn back to her. And every time I step into the Lyttlteton, or the Cottesloe there’s always a bit of an Angel, or Prior in the corner as well.