As I’ve all but abandoned my old PhD blog (for those interested it’s all still here) this seems like the place to reflect on 2017 in terms of professional and the overlapping personal achievements/life/whatever. And anyway the title of this blog seems apt.

So 2017 started with a promise of a steady job for the coming months (Lesson 1, never trust such a promise) as I was offered a ‘Maternity Cover’ just before Christmas. (Lesson 2, get exactly what that means written into a contract). Truth be told I was never happy in that job. I worked in Development for the Arts Council. And while the team were (by and large) the loveliest group of people I’ve worked with- and after the horrendous experience in the job before I was grateful for that- the job simply wasn’t for me. I lurched between abject boredom, and frustration at my seeming inability to do what was needed (not entirely my fault, and in part an issue of Dyslexia). For the next 9 months however it would provide steady (if slightly shoddy) income, which allowed me to do other things. And boy did I. I’ll get to that.

I’ll spare the gory details, but let’s just say the job ended sooner than it was supposed to. And that not 2 months later I saw my own job advertised.

Honestly that was my lowest of a 3 month period of low points. An ill-timed bitchy comment on social media meant I spent a Friday night sobbing (and I mean sobbing) for 4 hours straight. To have a job taken away, in that way. I felt beyond worthless. I wasn’t even worthy of being honest with. Never mind  not worthy of being allowed to keep my job. I was, and am so very hurt by the whole situation. I’ve been screwed over in my time (hello Academia) but this felt incredibly personal. That I was also trying (and failing) to find any kind of employment, meant I was feeling incredibly worthless at the end of 2017.

I felt trapped in a circle of not even rejection, but sheer hopelessness. I couldn’t FIND jobs to apply for never mind be rejected from. I felt like there was no hope of also having a job I liked and staying where I like to live. Feeling run out of my home town is a particularly awful feeling. Having just come off an incredible summer (I’ll get to it) I felt like I was back at square one; unemployable and hopeless. That was it, I’d had a brief moment of glory and I was done. Get back to generic jobs you don’t care about and be grateful.

And I still feel that way a little. However the end of 2017 saw something of a turn, with two job interviews for dream-job type roles. I didn’t get them, but I got in the room. And a year before I wouldn’t have got that. And it was after all, a year of progress.

Obviously a great deal of this year was taken up with a little play about Angels. I’ll get back to them in a minute. But there were other successes, in my journalism/reviewing writing:

Creatively it was also a brilliant year. I got to write for ‘Dirty Protest’ something I’d wanted to do for years. I had a short play performed at the Southwark theatre and off the back of that…ok drum-roll because I’ve not technically announced this anywhere:
I got commissioned to write a full length play.
Wait, it gets better. A play about HIV.
I got asked, and will be paid to write, the play I’d always wanted to ‘write back’ with to my research. Because a producer liked my short play. I’m still cautious, it’s a small step. A small scale piece of work. But it’s real, and happening. And more importantly I’m enjoying it. (remind me of that when a draft is due and I’m weeping into my laptop).
Sometimes when I look at this year it feels like nothing has changed. I’m going back to a job that I don’t really want to be doing, I feel I’m not yet ‘doing’ what I ‘should’ be doing. But these things happen in increments, in pieces. Change happens slowly, and as it happens I’m not a patient woman…
But change is happening. I got a new ‘day job’ another temporary one but still one that will let me hopefully do the ‘real’ work around it. And at the end of the year, right under the wire I got what really I feel this year has been building to: a book contract. I get to write the Angels book. I get to write what I always wanted to but the constraints of PhD would never let me. I have much more to say on this in this blog. But honestly, it is a dream come true. All I have ever wanted since I was a child was to write a book. And now I can. Or as my Mum is already saying ‘You can write the first’. Let’s hope she’s right.
But I did things I’m immensely proud of this year. And a great deal of it comes back to Angels. All that happened is well documented here in this blog, so I won’t bore you again. Except to say, I’m incredibly proud of what I did. None of that came to me or fell in my lap. I went out there, I asked for it. I fought for it. And I’m proud of that too. I got incredibly lucky this year- but that luck came out of 10 years of hard work. So it’s not all going to change overnight because of the things that happened this year, and that’s hard some days when I’m sitting frustrated in my office, or getting rejected. Or seeing others seemingly get ‘better’ things happen.
But then I can go back to those feelings of immense pride this year gave me; seeing my words printed in the programme, leading lectures on the play, answering the phone (Oh so awkwardly) to Tony Kushner. Susan Brown and Andrew Garfield telling me how much they loved my writing (and hugs from Mother Pitt and Little Prior). Seeing actors bring my words to life. Seeing reviews I was really proud of.
So going into 2018 I have the following:
And so, as we’re doing lists, this is what I need to do this year:
Things I’d LIKE to do this year
It’s not perfect. Little in life ever is. There’s frustration, and sadness and worry. But as the title of the blog says, ‘The World Only Spins Forward’
And in closing, this year saw the saddest event in my life in a long time, the loss of dear departed Doggy Chrissy. We had her for 18 years and we miss her dearly. For those who never met her this was Chrissy….

But after this, one of the greatest things to happen in a long time happened. Mum started dog sitting. And we met this ridiculous bunch of characters. My next book may well be called ‘Adventures in Dog Sitting’ 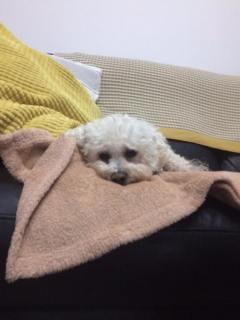 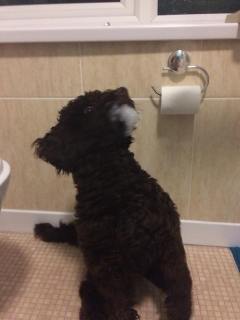 So if nothing else 2017 will be the year the mad dogs came into our lives…Marley Moo (the one with the bubbles) is back on Wednesday, so let the doggy chaos start again….