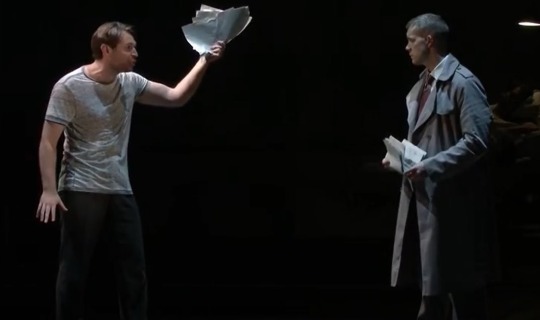 So project book. The honest answer dear project book (and pray that my editor isn’t reading this) is that you have been sidelined a bit. I joked on Twitter that a muffled scream didn’t quite make for a good blog post so I’d better try and articulate this.

The reality is that life gets in the way. When you aren’t a ‘proper’ academic, and even when you are. I’ve been settling into a new part time temp job, which hopefully is giving me chance to really get into a writing routine with this and…the other reason I’ve been a bit behind: several other projects on the go. And there is a tenuous link there. Firstly I have a play being produced, by the wonderful team at ClockTower Theatre  my play ‘Don’t Send Flowers’ is part of their Fifth season and is being produced later this year. But that means re-writes. Meanwhile, I’ve also been commissioned to write another play. My semi-secret project until recently actually has an ‘Angels’ link in more ways than one. Firstly it’s a contemporary play about HIV, something that even while doing my PhD I wanted to write. (And my supervisor scoffed at, so there’s another ‘screw you’ there) For me after years reading and writing about the plays of the AIDS crisis I always wanted to ‘write back’ to it. And I’m getting a chance to do that. The producer I’m working with actually produced one of my short plays for a night at the Southwark Playhouse. But it was in reading the programme for Angels last year that he realised my ‘other life’ might well be useful for an idea he’d had. The rest is history (and more anguished cries). But it really is still remarkable to me that from that programme essay I got to write a play. And a book. And who knows what else. It might seem a small thing in principle, but for me the repercussions have been huge.  And I’m so grateful.

Of course, writing one play, re-writing another, keeping up with theatre reviewing work, working for a living AND writing a book makes life a bit busy. And as this blog shows I had a major personal/professional dip at the beginning of the year. Which to be honest it’s taken me a while to recover from. Writing this book, this play (s) are all incredibly personal, and emotionally intensive for me too, as all of them are very close to my heart. So sometimes all that, and precarious employment/job hunting gets on top of me. The guilt of choosing to focus on my writing rather than pursue ‘proper’ jobs’ has been overwhelming at times. The sense of ‘failure’ or not being ‘good enough’ is so strong-even having got this far. And the fear it will all go horribly wrong also remains. But I think I may have turned a corner slightly, which I talk about more in this blog

And so what of the book? Well the honest answer is indeed a muffled scream of anguish. In part, to be fair to myself, I’ve been waiting on this week and the Broadway opening. Collating articles and reviews is a big part of the process, and honestly I’ve been distracted by that and if I’m more honest a kind of nervous anticipation. It might not be me on stage/backstage, but I feel a real sense of investment in it and willing it to go well. And trying to write about it while it’s all still ahead is hard.

What I’m also currently working on is structure- it’s become apparent to me that I have an overwhelming amount to say about the 2017/18 production. And a fair few arguments as to it’s importance in the ‘canon’ of Angels productions. In fact as someone said to me this week- I could write a book on this one alone. And so I’m working out how to fit all this, which I feel is so important, to talk about and really capture, into something that works as a book. Alongside it is my other instinct that the shared history with the National Theatre is my ‘angle’ and really is the book perhaps “only I” can write. So my next step is to wait on Broadway opening, collect all those reviews. And then go back to the start- back to the archives for the original NT production. And re-immerse myself in both. And see what comes out the other end.

So where are we project book? overwhelmed at times. Excited at others. Also slowly sort of convinced that this might be more than one book….

So basically, still this then: