I went to see Brad Birch’s new play Tremor at the Sherman Theatre  as a reviewer for Miro magazine. You can read my more traditional review here.
For new work however, I like to spend time unpacking the play, and in particular the writing a little more. So here is my not-review of Tremor. Fair warning ‘spoilers’ ahead, perhaps save for after seeing it.
The most fascinating element of watching this play for me was second guessing my own, and fellow audience member’s reactions. And judging myself accordingly. Going in knowing only a ‘tragedy’ causes a couple to reassess their situation and relationship my mind had gone to natural disaster, violent acts, end of the world scenario and yes, of course in the world we live in Terrorism. So, the slow burn of revealing the details of the event, and subsequent twist were a fascinating lead in to what had happened to this couple. The seemingly almost mundane nature of a bus accident when it is revealed is fascinating in that it showed how tragedy weaves its way into a relationship. The later reveal of the wider issues- the enquiry associated with it, the political and moral issues faced by the seven survivors, and the incredibly personal nature of that for this couple, really did feel like a peak behind the headlines surrounding tragedy we see every day. 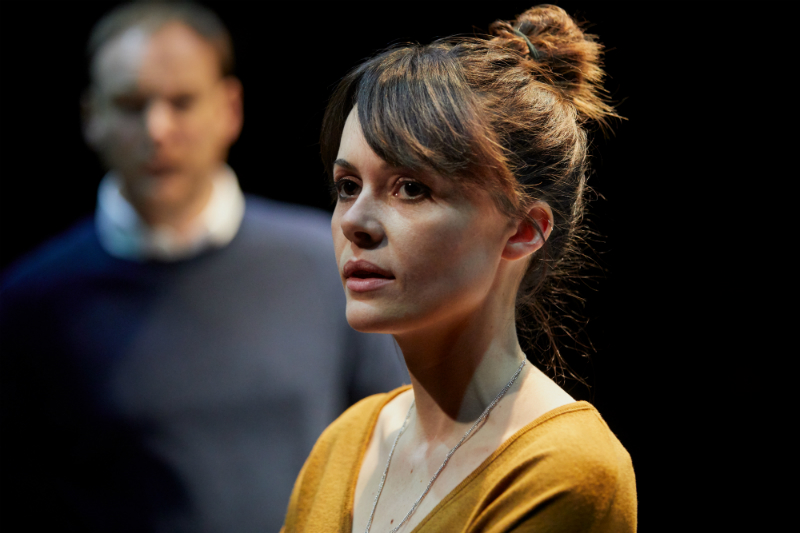 The slight insight the play gives- an hour of real time conversation- gives only a glimpse into the personalities and relationship of the couple. This is a powerful approach, it reminds us of the fleeting nature of our relationships, but also of the idea of how little we know the people in our lives. The idea of Tom and Sophie coming back into each others lives, with certain expectations of how the other is- in Sophie’s case based on both the ‘old Tom’ before the accident, the one who ‘took the piss’ out of everything, and the man she saw created by the media. And in Tom’s case, the Sophie he presumably once loved and cared for, and the Sophie who no longer fits into his world view.
This snapshot of their lives also gives a snapshot of trauma and grief. Tom’s description of not being able to get on a bus, or travel on a road. Of the impact on his life, inability to get a job brings to light the complexities of what happens after a tragedy. We care about him in that moment, we see how the accident has destroyed him. A sympathy that is tested as his political and social views, and their extremes are exposed, but perhaps also the memory of that previous sympathy perhaps colour that?
The characters, though we only get a small slice of them are complex, and challenge the audience view of them, and of ourselves, constantly across the play. We think we know who these people are, and then the idea shifts. We think we know whose ‘side’ we’d take and then it shifts again. And even when we finally see Tom’s most extreme of viewpoints, when he challenges Sophie to join him, we wonder still about how he got there and how we might also align with him, in the same position. Our liberal viewpoints, our instinct like Sophie to perhaps forgive and move on, our outrage at the way Tom behaved during the inquiry is niggled at constantly and challenged by the sympathy we might have felt for him earlier in the conversation. It’s complex, viewed from only a glimpse of them, out of context, without to borrow the inquiry theme ‘proper evidence’. And perhaps Birch is asking too much, spreading that challenge too thin on too little content. But the point more seems to be to make an audience think.
The themes Birch crams into his microcosm of the relationship are broad and complex. And in the hour running time can’t hope to be addressed adequately. And in the watching it is at times frustrating. There’s barely a breath between reference to accepting the gay couple in their friendship group and debating the press treatment of Muslims. But perhaps that’s the point. In our day to day conversations we don’t always pause for reasoned debate and analysis leaping from one ‘issue’ to another, because life and conversation doesn’t throw them at us in that manner.

The real time nature of the conversation also creates and allows for this. If you took the hour-long conversation I had with my companion with in the bar afterwards, you wouldn’t find a neat analysis of every topic we covered- and in that we touched on employment, the NHS, marriage (not our own), the Labour Party and ‘actors my Mother would like me to Marry’. Granted not all of these are weighty topics, but over the course of that hour we dipped in and out of some ‘Big Ticket’ items, and in some barely paused on them either. They’re all swirling around in our consciousness as we exist in the world, even when they aren’t fully articulated, and that feels like what Birch is reaching for. Of course in a play, rather than a chat in the bar, an audience might need a little more articulation to feel satisfied. But as experiment in theatrical form, its arguably also a satisfying approach.
As for the issues themselves, Birch doesn’t aim low. A little over halfway through his twist on the conversation that the driver of the bus was a Muslim immediately challenges and changes our perceptions of the preceding action. Was it predictable? perhaps if we’d thought a little about it in advance. But going in ‘cold’ the thought hadn’t crossed my mind, nor how the previous conversation between the characters was coloured by this. And what does that say of me as an audience member, and as a person? what does it say of someone else? Across this play, constantly I am drawn back to wanting to know my fellow audience member’s thoughts and reactions. And that act of judgement on their (potential) thoughts, feeds into exactly what Birch is getting at.

Our playwrights are (rightly so) trying to address the state of the world as we find it. Tremor does that by looking at the state of the world from the point of view of how we react to it. Both through characters and his audiences. We may never know how the characters reacted next to what they’d been through, and what their reuniting stirred up. We might never know what our neighbour took away as a reaction to the play. But Birch is stirring up questions, and reactions through that conversation. And as much as his writing distills that from the bigger picture, into that microcosm of a relationship torn apart, so it’s also distilled into audiences, and what they might take away.