3 Stars
The idea of taking the film that is All About Eve, that was once the play The Wisdom of Eve and making it the play that is All About Eve seems a strangely logical and clearly interesting prospect. Couple that with Gillian Anderson who most recently ripped out and tore apart audiences in A Streetcar Named Desire, and is seems a recipe for a fascinating and engaging piece of theatre.
Fascinating it still is, engaging perhaps not always. But anyone hoping for the same level of emotional payoff that Anderson’s other stage roles have demonstrated will likely end up frustrated with Eve.

Director Ivo Van Hove is undoubtably one of the greats of the 20th and 21st Century. I have no problem declaring his genius at times. However this perhaps is not one of those times. He is at his greatest when stripping back a piece to its raw material, and that is perhaps what is so frustrating here; stripped back to its raw stage Eve would have been so fascinating, and also ironically so raw. These questions of women ageing, what women think of women, how they treat other women and on top of that how men treat them, how women are viewed by both. The film- and indeed the play are so, so rich with these ideas. But they get lost in a cold, often confusing reflection that is overcomplicated and actually over directed.

The conceit is clear; using film on stage to show the lens through which Channing and Eve see and are seen. It’s interesting, sure, it offers some moments of reflection, an interesting device. But it feels ultimately so superfluous. Likewise, the idea of filming things unseen offstage, putting actors into closed off boxes and filming their performance, projected onto the back wall instead of seeing them ‘in real life’. Again, sure it’s a device, we’re playing with film and perception, the film to stage metaphor is not lost. The idea of film and the male and female gaze likewise. But it all feels like an experiment that goes nowhere. It also naturally feels like an experiment we’ve seen, and perhaps seen better in other Van Hove productions.
What he does get right, and again where he is ultimately the genius director of our time, is in the direction of the piece when the actors are allowed to simply act a scene. The pace is at times glacial, yes, but it is in those moments we see what Van Hove is so good at- the dark heart of the piece. There’s as sense of coldness to it, something that hits on the darkness and indeed fear within the text, that is there quietly underscoring throughout, but again gets lost in technology and numerous busy scene changes. 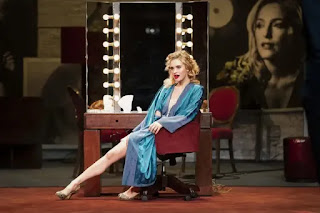 The play is naturally a vehicle for Gillian Anderson, and while she rises to the occasion somewhat there is a sense of expecting a little more from Anderson doing Channing. While the understated is to be applauded in most cases, again Channing is not a moment that requires understatement. So it is more a muted and pouting Channing that Anderson delivers, a kind of gliding towards doom than hurtling towards it. And that works, except in the party scene where we’re promised an almost firework display climax that never quite comes. This is of course perhaps too harsh a critique as there is more than one way to show a woman unravelling, and there are moments when Anderson delivers it perfectly- passing out drunk in the bath, a literal ‘snatching a wig’ moment. And there is something lovely about two of her quietest moments- stranded on the side of a road in a red headscarf, and later content and happy at dinner. There’s a lot going on underneath the performance, but like much of the production it feels like it’s fighting against too much else to really shine through. The moment she simply crosses past Eve at a party towards the end of the piece offers sheer ice maiden delivery that is worth the rest of the performance put together.
Lily James does some surprisingly subtle work as Eve. Not surprising that James has the capacity to be such- she’s an adept and interesting performer- but more that Eve of all the characters is given space to do that. She lurks in the background of scenes, as subtle as the changing pictures in the background (Nice Dorian Grey reference there) and if you watch you can see the wheels turning, but it’s subtle never scene stealing, just waiting in the wings…so very Eve.

The supporting cast do admirable work, considering they compete not just with Margo Channing and Eve as characters. But also, that the compete with the machinery of Van Hove’s direction. Ultimately its’ them that come out as the most ‘human’…and perhaps that was indeed Van Hove’s point? Stealing perhaps everything from even Anderson/Channing and James/Eve is Monica Dolan as Karen Richards. Given the shared narration with Ian Drysdale as Addison deWitt, she as actress and character subverts exactly what Even and Margo are doing; she doesn’t try to waltz in and steal a scene, she just does. Meanwhile Drysdale is delightfully devious without ever slipping into pantomime caricature. He commands attention and cuts through the noise to refocus the story at key moments and is magnetic with it. Meanwhile Julian Ovenden is charming and at times vulnerable as Channing’s younger man Bill.

The ending it seems changed several times in previews, it is perhaps a more interesting thought to have an ever-changing revolving ending that the audience never quite know what ‘new Eve’ is going to do…now that would be a fitting end.
Ultimately Eve is interesting, without much feeling. It feels like an intellectual experiment that just falls short of the devastating undertone that sometimes seeps through.
Noel Coward Theatre, London, until 11th May 2019.
Tickets Here

These tickets were purchased by myself (Dress Circle restricted view).