And so here it is…my top 10 musicals of the decade. It turned out to be a slightly emotional journey.  As a ‘Dr of musicals’ (in part) that probably isn’t surprising as this decade coincided with that chapter in my life. But it turns out musicals meant a lot in that time. And I’ll fight anyone who says musicals aren’t a serious artform.

I don’t normally condone the separation of musicals and plays, to me all things are equal in theatre (except for mime). But for the purposes of keeping these lists under control two lists made sense. They are for once ranked as well.

I’ve gone for ‘productions’ that moved me, that I will remember rather than sticking to new works on both lists- for me this is about personal memory, impact and what I take with me as the world spins into a new decade. And so, the musicals….

There’s also a playlist to accompany this one here

Yes alright it’s in here…in fact back in the far off land that is 2016 I was quite the Hamilton fan. I just now have Hamil-fatigue. Or more accurately Lin Manuel Miranda fatigue (less is more darling, less is more). That said, it is clearly one of the musicals of the decade. It is utterly brilliant- and the storytelling through choreography doesn’t get the credit it deserves. Also I saw the original cast for $10 ‘cos I won the lottery. Which makes me the smuggest theatre-wanker of the decade.

This musical is totally out of its tree. The tree is in Russia and frozen. And they’re fighting over whether to cut down the tree…oh wait that’s another Russian play. Anyway, this musical was madness, and I adored it. And I want to camp out at the National Theatre until they agree to stage it (because nobody else will). Also, Josh Groban belting at the top of his lungs feet away from you is a bucket list moment. 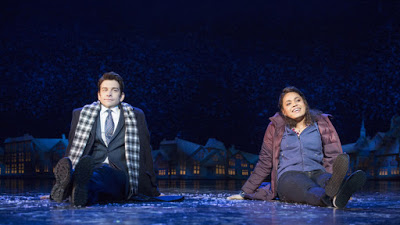 Justice for the Hog! Nope still not over Broadway not appreciating the Hog while we sold it out and that I never got a Groundhog Plushy. Anyway. This show…was just the perfect contemporary musical. Yes it was a film adaptation but it was one made with heart and wit (and Tim Minchin). And Andy Karl. The last number had me ripped in two feeling hopeful and heartbroken all at once. It was beautiful.

Another for the ‘know your history’ pile perhaps. But also, a rite of passage for many- you could glance around the audience and know who was feeling the same thing as you at a given moment. And maybe that’s why it didn’t ‘work’ for everyone- perhaps its one you have to have ‘lived’ some aspect of to truly love. And that’s ok, not every musical can be for everyone. But isn’t it beautiful that Fun Home can exist for those who needed it and didn’t know?

If someone asked my most joyous musical theatre moment of the decade it would be seeing an audience join in with the dance moves at the end of Eugenius. That show felt like a meeting of worlds- my super nerd world with my musical theatre super nerd- and it was beautiful. This whole musical in fact was beautiful- an endearing story of high school love, layered with nerd references, what’s not to love? In the face of far bigger musicals, with bigger budgets, starry casts and yes ‘highbrow’ themes, Eugenius is the one that brings me the purest joy.

Is it cheating to include this twice? Maybe but it’s my list I’m making the rules here. The first time I saw it Falsettos blindsided me. I haven’t cried like that at anything in the theatre, ever. You’d think then I’d be prepared the next time…wrong. There’s something in this, perhaps similar to Fun Home that speaks to experiences and thoughts that perhaps have to be shared to feel the true resonance. But it’s also quite simply a beautiful piece of work, and a fascinating exercise in musical theatre history to track and analyse its progression over the years. The Broadway and London productions were like night and day in their approach, and while for me London had something ineffable that made it hold a place in my heart forever, both were important moments in a musical theatre decade for me.

This show…this show. It sounds ridiculous right? Let’s make a musical about being stranded in Canada on 9/11…utterly ridiculous. But it’s almost perfect. If I had to show a piece of musical theatre to people who think Musicals are all jazz hands and shallowness, I’d show them this and challenge them not to cry. It’s also an act of shared catharsis, whether you remember 9/11 or not. Whether that event touched you or it was a distant thing, this show brings humanity to the recent past, to politics, to news headlines…it’s in part sitting in the dark crying with strangers, but more than that, emerging with a sense of hope about what humanity can be. And lord knows we all could do with more of that.

Sometimes the show you need comes along at precisely the moment you need it. Getting to see Company with a female Bobbie, in the year I was 34 going on 35 was an act of musical theatre serendipity. The fact that Marianne Elliott directed it made it pretty darn perfect naturally. While the Sondheim Bros continue to argue about its validity, the production proved them wrong by existing, and connecting- in a way I’d bet the ‘real’ version no longer does. On a personal level, seeing yourself reflected back at you is always a powerful thing, and feeling a little less alone in the world is why we do this right?

Next to Normal took me by surprise. I went because of the Rent link and because one of my nerdy goals is to see all the Pulitzer Prize winning musicals (nerd alert).  Somehow I managed to avoid knowing anything else. And it was one of those shows where I looked at my Mum at the interval and said ‘It’s so good’. And now it’s been 10 years I think I’m ok in saying, whenever I think of the moment Dan said ‘Why didn’t you go with her’ I still gasp internally (or am I dense? Did everyone else know?) and then cry when he says ‘Gabe, Gabriel’. As I’ve grown older, it’s a musical that has grown with me. I saw it and I felt Natalie’s rage against the world, her frustration at trying to escape. I now feel Diana’s confusion, her grief and Dan’s frustration at being helpless. It’s a musical that feels like its become part of me.

The other part of Next to Normal that feels so special to me is that I saw Marin Mazzie and Jason Danieley play Diana and Dan. At the time I didn’t know who either of them were, but I remember being utterly floored by Marin’s performance, and wondering how as husband and wife they could do that night after night- while also knowing I’d seen something special. When Marin died in 2018, it was the first ‘celebrity’ death that I cried over in a long time. Even now, I feel incredibly sad she is no longer here. I saw her perform only once but she left such a mark.

As with the plays list there was never really any doubt what number 1 would be? Predicable but also I spent most of this decade with these plays, of course they are my top two.

I first saw Bruce Guthrie direct Rent at RWCMD in 2013, and that was something special. Three years into my Ph.D. it was a gift to spur me on to see a production with a director who ‘got’ it (and frankly actors the right age!). When Guthrie came back to Rent for the 20th Anniversary tour (we’ll quibble about dates later) at the St James’ Theatre (ah remember when it had a good name) I knew it was going to be something special.

And it was. From the front row it was…intense…but it was special. As someone who hadn’t known Rent before Guthrie directed it like any other piece, rather than the time capsule piece most directors have approached it as. It felt like any good revival should be- created again for the moment it was staged in. And free from the previous productions, it felt more honest, more real and certainly more visceral. It was like seeing an old friend grown up.

That production of Rent reminded me what I loved about the musical. It also reminded me that the musical had so much more to give me as an academic, as a writer. Still, I’m waiting to properly write about it. Also, there’s something about being able to truly ‘grow up’ with a piece and revisit it, finding you’re still as much as in love as when you were a teenager.

How do you measure a decade in musicals then? Measure in love it seems…