The Welsh theatre scene is divided this week, into those audiences at Tylwyth who remember Llwyth…and disgustingly young individuals.
For those unfamiliar, Tylwyth revisits the group of characters first seen 10 years ago in Daf James’ Llwyth. A sequel yes, but one where if you’re new to the characters you won’t feel lost. And one that if you remember the previous installment, you’ll be rewarded with lots of little nuggets and references to the previous.
It is thankfully a play that ‘feels’ the same as well for previous audiences. There’s nothing more disappointing than a sequel that feels like it’s from another world. And immediately it’s clear this is dropping in on the same world. The characters have matured (or at least got older) and the only change is a parallel maturing of the writing, and a feeling of growing into the performances, and the direction. All of that happens in a deeply satisfying way – again for familiar audiences there’s a real feeling of almost pride at how everything about it feels like it’s grown, evolved…but also retained a sense of familiarity. 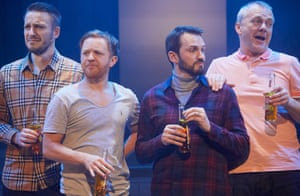 The story follows Aneurin again, this time dealing with the ‘next stage’ of life- a partner and newly adopted children. Worrying about fatherhood, about the impact on his relationship with Dan (a quick flashback reminder to how they met as well pulls the previous story through). Meanwhile, Gareth (Michael Humphreys) and Rhys (Arwel Davies) are wondering what happens to their relationship post-marriage (and post-Gareth being the most successful gym franchise owner in Wales). And a heavy dose of nostalgia rears its head when Dada (Danny Grehan) announces he’s moving. Younger man Gavin, now all ‘grown-up’ (well 25) also crashes back into their lives in spectacular style via a night out that brings back old memories and old habits. 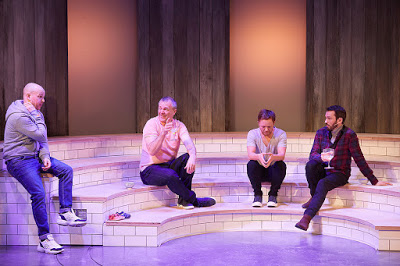 Truly an ensemble cast, and one that is made stronger by reuniting (most of the cast were part of the original). And they slip into their roles as if they never left. Simon Watts holds the piece together as narrator of sorts Aneurin, but he’s bookended by the presiding feeling that Danny Grehan brings to any scene. Likely to be underrated is Martin Thomas as Dan who has the difficult ‘outsider’ job within the group dynamic on stage, but who brings a quiet, thoughtful performance that is truly powerful in giving an outside view on the story, and offers a quieter but no less moving performance as Dan feels the effects of Aneurin’s actions. Aled Ap Steffan is equally understated and powerful with a challenging storyline for Gavin. Most dramatic in some respects- with drug use and assault to communicate over a series of short scenes, Ap Steffan fills in the gaps of the last 10 years with an evocative and sensitive performance. Balancing the group out are Arwel Davies and Michael Humphreys as Rhy as Gareth. Given the more difficult ‘B plot’ of the play, both are so magnetic to watch in different ways, that their story is equally engaging. In their final scene as Davies reveals unexpected facets of Rhys’ personality and story he’s both hilarious and affecting, and Humphreys equally uncovers the unexpected in Gareth’s character in a truly affecting and sweet moment. Both frankly leaving you wanting more from their story. It does of course come back to Watts and Aneurin. And he has a patient quality to his performance of the Aneurin’s energetic, centre of attention, storyteller persona. He weaves that impeccably across the play, pulling the audience along with it. But again he parallels with Grehan, who is, there is no other word for it, fabulous throughout. But in their final scenes, Aneurin and Dada have single line revelations which are a masterstroke of writing, and performance paralleled in both actors. They each deliver these revelations quietly, with no bells or whistles, but a simple honesty. Those rare moments of perfect balance in theatre- writing, direction and performance.

Stylistically James and director Arwel Gruffydd have created a piece that is unapologetically theatrical, but that keeps storytelling and character at its heart.  Performed on a series of white-tiled blocks that move in concentric circles to create different spaces. Entirely abstract relying on minimal props to create each scene, it instead gives the performance over to the actors and audience, and the focus stays firmly on character and story. Equally there are moments of wonderful theatricality- a beautiful piece of ensemble work to music as various characters emerge in the sauna-topped by Danny Grehan resplendent in sequins. And of course, music throughout. Those familiar with Llwyth know how Gruffyd and Jones integrated Welsh musical tradition both in writing, and performance, and Tylwyth continues this. Aneurin\’s monologues are fused with lyrical prose that reflects traditional Welsh music. And music, both in the pop music past and present that is integrated- and integral to the storytelling, and the choral tradition of Wales. Culminating of course- as this wouldn’t be the second installment without- with a choir performance (and a nice in-joke line reference there too). The choir was so pivotal a moment both within the story and around it to Llwyth- that bringing together of community, Welsh tradition and performance, that it feels an equally vital part of the play. (And credit across the performances to Cor Aelwyd JMJ, Corlan, Cor Seingar, Cor y Pentan, Cor CF1, UWTSD students, ABC (Academi Berfformio Caerdydd).
Tylwyth is a play its impossible not to rave about. The writing, direction and performance are pitch-perfect. But there’s much more that makes it important as well. For those who just came for a review, stop reading now. For those interested in my particular brand of theatrical interest read on after the break…
Updated 16th March: Sadly the tour of Tylwyth was cancelled, an understandable but devestating decision for those involved. This mini-essay lives on as a little hopefully testement to it.
Catch Tylwth on tour across Wales. Details vis Sherman Theatre Website.