“Nothing more British than discussing life-changing events over a cuppa.”
And nothing like a crisis, and many cups of tea, to kick start your writing.
I’ve spent a few hours most days this week rehearsing a play with some actors (yes with a cuppa). 6 weeks ago, I didn’t think that was something any of us would be doing.
But I’m really thankful the guys at Bloom theatre got in touch. Saying they’d considered a piece of mine for a ‘work in progress’ night before…all this. And would I be interested in helping them make something online instead?
Of course, the answer was of course. And as they talked about all the exciting additional plans for the online event- asking audiences to respond to the pieces and sharing those creative responses- it seemed like the online creative thing I’d been looking for.
I’ll follow up this blog with one talking more about the play, it’s content and where it might be going once it’s ‘out there’ right now it seemed pertinent to reflect on the act of getting it to ‘stage’ (screen…zoom…) in today’s world.
But first I think we need to acknowledge what this period has done to us all, and that’s simply that it’s done a number on our mental health. I know all of us are feeling every rejection more keenly. Feeling like everyone else is doing ‘better’ whatever ‘better’ is and feeling like we should be ‘doing more’ whatever more is…we’re all doing our best. And if you aren’t picked for a thing, or you don’t want to do a thing, or everyone else is doing a ‘cooler thing’ than you. They aren’t, you’re doing your best. And your best is surviving this.
I think I might have just slipped into one of the characters from this play in that speech actually. As one online rehearsal demonstrated this week I should very much stick in my lane and never, ever attempt to act again. So, I’ll stick to talking about the writing. And the process of getting the writing to stage (well, screen). And I’m not exaggerating when I say, this process has really turned everything around for me.
It’s something when you come off a virtual rehearsal and feel like you’ve been in the room. Our director Neil said to me ‘we could have been messing about in the Tillman’ (which is a space at the Arena theatre, which we have both spent considerable time messing about with plays in). And for a moment it all felt sort of normal. Except that I can’t hug any of them. And I really want to hug all of them, a lot. (This includes our resident virtual rehearsal crashers baby Alana and cats Nimbus and Rouxfio).
The wonder of this situation is however getting to work collectively with people you might not have been able to in the ‘real world’. Who knows which of us would have been too busy, have another job, have a day job to go to. As a writer too, I wouldn’t have had the quality time to spend rehearsing this extract. Between ‘day job’ and not living in London, ironically, I’d have probably had a quick skype with whoever was directing and then rocked up on the night to see what had happened. And while that’s also really useful for works in progress, a total handover to someone else, this has felt so much richer. I’ve been able to sit as actors asked (super smart) questions about the piece, and a director pieced it together. I’ve been able to have long conversations about the longer piece with actors and taken on their instincts about the characters.

And it challenged us all. To think about how we stage this, share this. And what is means now for this piece, and in terms of developing something. There’s a lot of hang wringing and dare I say it judgement about putting content online by theatres. My take from the start has been, if you’ve got a reason to do it, do it. And that reason might just be ‘I’m a bit bored and want to do something with my day’. It’s not taking away from what we’ll create when we’re allowed back in the room. And nobody has to watch it (obviously please watch it, but you don’t have to). Much like any kind of creativity, nobody should feel obligated, but equally, nobody should feel judged. And for some of us, it’s really helped. I’m so grateful for this opportunity, both for the structure, and creativity it’s given me right now but also for going forward.
The first few weeks of lockdown I struggled. My brain wouldn’t engage. I had the same feelings of frustration and ‘should I be making things’ and guilt ‘You should be using this time to finish things. And I couldn’t get going on any of it. Used to juggling work, as well as creative work. Used to setting my own routine, not having it dictated by the government and a virus, I struggled. Being offered a concrete thing with deadlines, and more importantly, other people, changed that. My brain has been on fire all week in a really good way. I’ve ended up juggling more projects on top of this than is strictly practical…but it’s brilliant to feel creatively alive- and alive as a creative again. It might not last. I’m aware of that. Next week I might slip back into the sloth-like struggle of lockdown life. And that’s ok. It’s ups and downs. We’re all learning. But I’m so grateful to have had this time.
And in the bigger picture, it’s been so important for me to return to this project. For some context, it was previously a collaboration. And my collaborator stepped away about 6 months ago, after we’d put it on ice for about 6 months before that. No beef, these things sometimes pan out this way. He’d returned it to me with his blessing to continue it myself. But I’d struggled. I really wanted to, but something in me couldn’t quite untangle the mess we’d got ourselves into as a pair.
When I started to look at the whole piece again, it became weirdly clear to me, both through a kind of muscle memory of what I’d written, and in what I’d actually written…I was just so unhappy when I wrote that. I’m not the kind of writer who ‘writes my way out’ I’m at my utter worst creatively when I’m depressed or unhappy. But because I’d been in a partnership, I’d written this whole thing regardless, and it’s not bad, I mean bits of it are truly terrible…but I read it and I think ‘wow she was really unhappy’. As creatives our work is tied to our lives whether we like it or not. And at that point I was struggling in a shittiest of temp jobs (Hello bottle of actual urine thrown at my head, and shitty Doctors). And feeling like I’d just failed at everything in life. I can feel my loneliness in these characters, my own frustrations. And hey some of that is good and useful. But it’s fascinating to look back at that and feel it in the writing. So to come back to it, give it something new, feels like turning a page. And more importantly to do it feeling supported by Bloom Theatre and this amazing team of creatives has made it come to life. It really makes such a difference feeling like someone believes in you, in what you\’ve written. And when they come to you with such energy and such engagement, it lifts what you\’re able to do as a writer- and what you believe you can do. 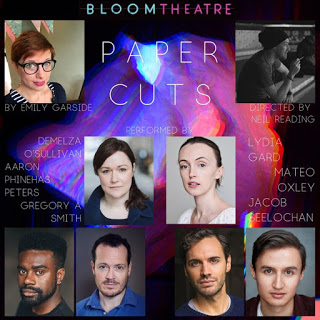 And who knows what I’ll look back at this version with. The play is about HIV and there’s a sufficient irony in writing about a virus, while being held hostage by a virus. As an academic of a pandemic, it’s been a really difficult few months’ work-head-wise trying to think critically about this pandemic, in relation to another one (spoiler alert, you can’t while you’re in it, you just have to live it). But what this play is also about is human connection at a time when people need it most. It’s about complicated relationships with health, our bodies and ourselves. And that seemed really relevant to talk about. With a cup of tea, over zoom. Because that\’s how we party these days right?
The whole of \’Saplings 2\’ from Bloom theatre begins on May 14th  with all the plays available on their YouTube Channel
You can see ‘Paper Cuts’ as part of ‘Saplings 2’ with Bloom theatre on 18th May.
Find them on Twitter here. or Facebook here