That’s the story of why. This play will always have a special place in my heart, wherever it ends up. Matthew, my original collaborator, was the first person to believe in me creatively and ask me to create something. A weird winding path led us together- he saw my programme essay on Angels in America, which happened because of my Ph.D., and remembered a short play of mine and put two and two together in a way nobody else believed in before. A little down the line, Jack and Simon saw something in the messy version of that play and put it in this brave new experiment for Bloom Theatre. And then we threw together a few of the very best people I know and added a whole group more of now, even more of the best people I know. Our Director, and my friend, Neil took all this and ran with it and reminded me that as a writer, I’m part of that process. ‘My’ Will, Mateo not only gave a brilliant performance but tirelessly pushed me as a writer and most importantly, believed in me enough to do that. Above all that though, in what are quite frankly the very worst of times, the eight of us came together and made something. That feels important. In the context of this piece.
As a student of that ‘other pandemic’, I’ve really struggled to have the one thing I always held to be ‘the answer’ – theatre and its power- being taken away from me in this pandemic. I think I hope, we’ve just proven it hasn’t. Not quite. We will find a way, to assemble, to raise our voices through theatre. We will do it because, as a community, we know what it feels like to have a virus decimate us, to have our governments look away, to be denied the care we need, to lose those we love…so we will find ways not to stay silent.
And so that’s it, for now. I can’t wait to get back to redrafting the longer piece. For a teaser of what’s to come (and to end on a lighter note) here’s an additional snippet…
Joe:  Look, if you don’t want to, if it’s something…I don’t know I can’t even guess what this big scary thing is. But I promise you it’s probably not as big a deal as you think.
Will:  How do you know?
Joe:  Well try telling me. I’ll tell you mine if you tell me yours. Mine’s tried and tested. Repels not only gay men, but friends and the occasional family member. Though that’s sometimes a bonus.
Will:  It can’t be that bad.
Joe:  Ha! See. Ask my last five dates. Ask Aunt Barbara.
Will:  Alright…
Joe:  Alright so we’re doing it?
Will:  Ok…
Joe:  Ok then.
Will:  I’ll go first..
Joe:  I’ll got first…
Will:  What no-
Joe:  Wait I’ll-
Joe: Ok…
Will: Ok..
Joe: I’m an undertaker
Will: I have HIV.
Joe:  What?
Will:  What?
Joe:  I’m an undertaker
Will: I have HIV.
Joe:  Oh.
Will: Oh.
Pause
Joe:  I mean I still think mine wins for originality.
And doesn’t that sound like the rest of a play you want to hear? Watch this space…hopefully. And see you back in the ‘real world’
Paper Cuts will be on Bloom Theatre\’s Youtube from 7.30pm on Monday 18th May.
Twitter: @bloom_theatre
Facebook: bloomtheatre
Instagram: @bloomtheatre 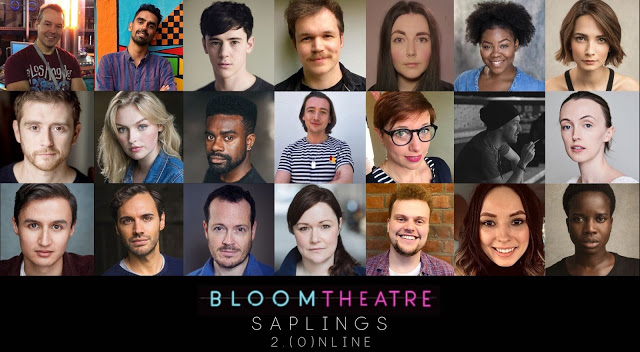