When I was in Year 9 or maybe Year 10 of school, my English teacher wrote in my report ‘I look forward to reading your first book.’

I’m not entirely sure that Mr Evans, teaching in my slightly skanky High School under Section 28 quite anticipated my first book being about a Canadian TV show that ends with a gay wedding. Or maybe he did, who knows. But here we are.

In all fairness, I didn’t expect my first book to be about a Canadian TV show that ends in a gay wedding. Certainly not as a teenager. I don’t think I could even imagine writing a book about a Queer love story on TV. Imagine if I could tell teenage me that.

But that book made it out into the world today and I couldn’t be more pleased that it ended up being this one that made it first.

It’s actually a neat parallel to the show itself that not getting what you planned, turns out to be what you need. And what you get also gives you the path you needed to be on.

When I got offered the Inklings book I’d just finished the first draft of my first (last?) academic book. My long-worked-on, my much blood sweat and tears put into Angels in America book. It was while writing it in fact the idea for writing about Schitt’s Creek came to me (and the inclusion of a Dan Levy quote in the Angels book just to piss off the snobs). That book is still sitting in peer review limbo. And I’ll be honest I don’t know if it’ll ever emerge. In fact, I wrote that book just so I could say ‘I did as much as I could and failed’ because at least if I did all I could fail with some sense of dignity.

Because it’s no secret I don’t fit in with the academics. I think maybe that book may still survive, but the ‘real’ academic writing game isn’t for me. In writing this book I realised that. In many ways. Part of me worries that the academics I know might look at what I’m doing and give me an ‘Ew’ and look down on it.

But much like Moira Rose I’m through trying to impress people. And maybe, just maybe like Moira too this is the point at which I say ‘well I’m doing it my way or not at all.’

This book is written from the heart. It’s written from my nerd’s brain. It’s in my voice, unlike anything academic writing would ever let me do. It tells a bit of my story and a whole mish-mash of the nerdy things I love in and around this show. And if that isn’t truly me being me as a writer I don’t know what is.

This show- and writing this book about the show- helped me find my voice as a writer, in a way nothing else has. It gave me the confidence to say, yes this is what I’m doing, and it’s no less than the academic work that I wasn’t allowed in the ‘club’ for. It’s also no less important than the ‘cool kids’ of theatre who never quite wanted to let me play. In writing this book I discovered what kind of non-fiction writer I am. But tangentially because of this show, and because of this book, I started to discover what kind of fiction writer I might one day be.

In the case of the show, the way it tells its stories, full of heart and unapologetically, made me say ‘yes, that’s what I’m doing now’. My yes, very rom-com inspired way of storytelling fused with a slightly dark and twisty sense of humour has never quite fit the world of theatre where I tried so long to fit in. I’m just a bit too from-the-heart-honesty and not ‘quirky for the sake of quirky’. And so inspired by both a show that wore its heart on its sleeve and told its stories unapologetically and being told ‘yes you are good enough to publish a book on this I took a leap and applied for a Novel writing course with the Faber Academy. A couple of months in and I feel like again, as a writer I’m finally finding who I am. I’m writing a story that I love with all my heart, whose characters inhabit my head and heart, and which I’ve cried so many good tears over. I haven’t had that in a long time with theatre writing, that just felt like a battle, a popularity contest I couldn’t win. It feels good to just be alone with the writing. Of course, I’m aeons away from publishing any fiction, and even if I never do, it feels good to finally know how to tell my stories.

To borrow from sitcom-land, this book didn’t make me break up with theatre entirely, but like Ross and Rachel, we’re on a break.

And to continue the appropriate romcom metaphor, I’m the man with the signs from Love Actually saying ‘enough now enough’.

Because writing this book proved to me that you can be smart, occasionally funny (?) informative, analytical…and write something people (hopefully) want to read. And that’s what I want to do. That’s what I plan to do.

I already signed a contract for another ‘trade’ book, taking my other PhD research to an audience that actually wants to read it (book on Rent coming 2022…) after being told by academic publishers I wasn’t good enough to write that book, the right publisher for me saw the potential in that book, and I’m excited to write it. Alongside that, it’s not too preemptive to say there’s something else in the works too, and it feels like finally being given permission to be the writer I am instead of trying to fit into a box.

And isn’t that a very Schitts Creek thing?

I think too there’s a measure of ‘I need those people to know I’m not a joke’ in all this. And maybe, just maybe I’ve managed that.

As for the book itself? Of course, it’s terrifying to have it out in the world. I’m scared that fans of the show will hate it. I’m scared I’ve got something wrong. I’m scared people will just say it’s terrible.

And as a Queer person, as a queer writer? It’s so so important. I never could have dreamed that it would be ok to write this book when I was in English class as a teenager. As I say to my Queer Lit students, I learned about The Color Purple without knowing Celie was gay. When I first started writing about gay stories in University, I had to hide the books at home from my father. We’ve come a long way, all of us. I couldn’t have dreamed this book because couldn’t dream we’d have TV like Schitt’s Creek or that I’d have gotten myself to a place, both as a writer and a queer person, to be able to write a book about it.

My first book might not have been what I or my English teacher imagined it would be. But it’s a book that say a lot about me I think. It’s got a lot of me in it, and it feels like a shift towards a new chapter. It’s both about saying this is who I am as a writer, but also as a person. ‘Coming Out’ as I talk about in the book comes in many forms, and for me, it’s been through my writing I’ve been able to figure out who I am in that respect, the more write, research and teach queer stories the more at home I am in my queerness, and that’s important for me, and the work I do.

So thank you to everyone who has bought a copy, who reads it. In no small way, you’re making a kid in a skanky high school, who didn’t imagine she could write a book about queer stories, really really happy.

Oh and as a footnote, interestingly, around the same time (give or take a year) everyone my age was going to see some teen film called American Pie. I wasn’t cool enough to go and see the teen film about sex. So I didn’t. I didn’t meet ‘Jim’s Dad’ as a teenager. But I’m really grateful that I met Johnny Rose as an adult. 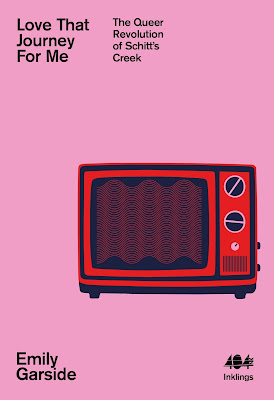 p.s should you be inclined, you can buy the book here