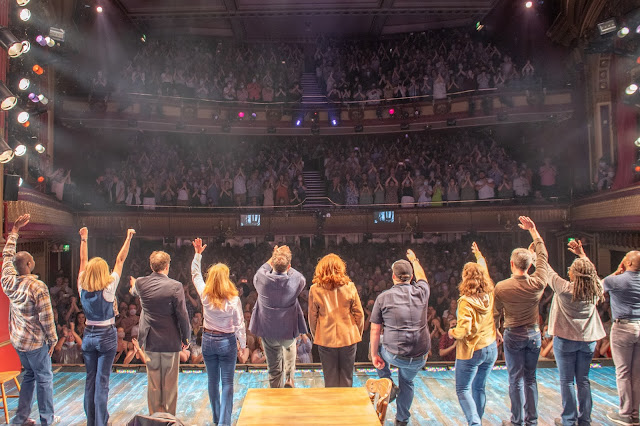 ‘You are here, at the start of a moment’

Those words in ‘Come From Away’ never felt more true.

I’ve been lucky, I’ve had a lot of magical nights in the theatre in my life but I think for the rest of my life that one will be the one that stands out. And I hate why, I would trade that night in a heartbeat if it meant not living through over a year without the theatre we know and love if it meant all the loss of the last year could be erased. But out of that came something magical and good, and isn’t that really what this show is about? So it felt right to be there last night. We drove from Cardiff and back, and it was worth it.

It was without doubt an electric night. I was lucky to be in the front row, taking the stance of frankly ‘fuck it I haven’t spent any money on theatre tickets in a year.’ and to see up close the cast’s reactions to that night was a wonderful and powerful thing. People say often ‘the atmosphere was electric’ but truly it was. You only have to listen to the response to the first song here to get a sense of it:

THIS was the reaction after our first number @ComeFromAwayUK tonight…

You can imagine our feelings…

You knew in that moment that the audience was there to celebrate this return. But there was also something else in the air, something I certainly felt- a much deeper need for the story this show tells. A connection stronger than anything I’ve ever had to this much-needed story of hope in the darkest of times.

In some way it’s the parallels in the two stories. For many of us, 9/11 is the first, and biggest ‘living through history’ moment we remember. Having now lived through history in the worst of ways for the last year, that parallel seems even more resonant. For me the moment that gets me, not in a sense of crying but in a more visceral way is when the ‘plane people’ in the show finally see what has happened on the TVs, because we can ‘see’ what they see even if we don’t see it in front of us there, those images are burned into our minds forever. There were moments again in the last year, not least the moment we heard the theatres closed, where we knew we were watching history unfold and our lives change forever. Watching a show about witnessing history, felt apt then after a year of living through history of the worst possible kind.

This show is also about community, about finding community at the worst of times. That’s also why it felt important to be back there last night. In my other life, I am fittingly, deeply ironically, a Doctor of Theatre’s response to another pandemic-AIDS. In that theatre responded by gathering, coming together in mourning, in activism, to shout at governments from the rooftops. For all of my adult life that story has been my story- that in times of adversity, of catastrophe you gather, you make stories, in anger, in mourning, in community. In the last 16 months, that power was taken from us at the time we needed it most and that has been the most painful element to bear. So there’s something for me in particular about Come From Away and it’s a message of gathering together, in the face of tragedy, of community in the face of adversity that feels really fitting. 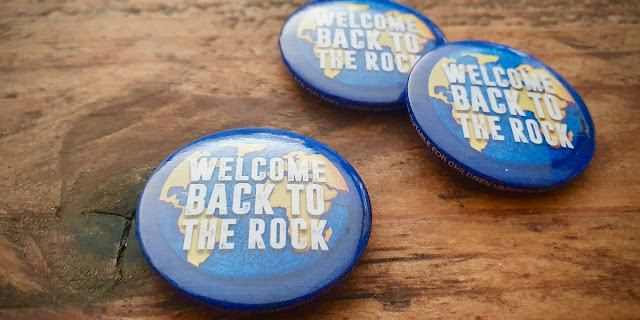 There’s so much hope in this story, against a backdrop of tragedy. There’s so much celebration of what remains even in the face of despair, and that’s what last night felt like a celebration of, the triumph over despair. The idea that we somehow made it through all the last year threw at us and we got back to this. In the story that moment of triumph is when the ‘come from aways’ make it back to Gander, making it back to the theatre after so long away, felt like that.

I have a group of theatre nerds. We got each other through this last year. Since almost the day the theatre shut down we said ‘we’ll be there on the day it reopens’ and we were. Everything else aside being there for Come from Away opening feels like we made it, we survived all that and came out the other side. That there’s hope. It was also a reminder that theatre like Gander can be a place that welcomes you back wherever you’ve been.

To go back to The Rock last night was truly to ‘come from away’ it was an electric atmosphere and the kind of once in a lifetime experience I will remember forever. I think all of us there will.

The only drawback is, this adopted Canadian is now really craving a Tim Hortons.