While brusque and auspicious on the outside there is from the outset a clear tender and caring nature to Brown’s Hannah. She is something of a reluctant Mother-figure but there is a sense she better understands the others she takes on- Harper, Prior- rather than her own son. In the scene where Hannah dresses Harper, brushing her hair and attempting to make her presentable, it is on the outside another of Hannah’s defence mechanisms- presenting an image is as good as making things right- but Brown makes it tender, caring despite a sense that Hannah herself resists such sentimental overtures. It’s the resistance of this Brown plays pitch-perfect when she accompanies Prior to the hospital. You sense the conflict within her- the aversion to sentiment, a fear of the unknown in Prior, what he represents and his illness- but also underlying caring nature that she cannot fight. It’s an unsentimental and almost basic in its execution- there’s no great tears or hugs, indeed she barely touches Prior but there is something incredibly intimate in the reserved, cautious Hannah crossing that barrier to touch Prior’s illness-marked skin. Up against Andrew Garfield’s high-energy, high-strung portrayal of Prior, the energy Brown brings to this scene pulls him down with her to a quiet intimacy that really balanced his portrayal of Prior and gave the audience an invaluable glimpse into what was going on inside. This scene is an illustration of the power of Brown’s performance, such an experienced and intelligent performer working with another and bringing out something new, and the best in their respective characters. In a play filled with big moments, and heart-breaking moments of huge magnitude it’s easy to overlook this scene as a link between others. What Brown does here elevate it to its proper place as one of the most heart-breaking and important moments in the play in terms of character development and transition.
Development as a character is key to Hannah, and where Brown’s incredibly human portrayal of her shines. From the woman who shouted, ‘You’re being ridiculous’ down the phone at Joe, to one who stands up to him. To the woman who slept in the chair to help a man she barely knew. On one hand Hannah has all of this in her all along- as we all do- but she changes slowly and painfully across the play. As Kushner himself describes, and it comes about slowly and through a painful letting go of her home, her son (for now at least), and letting in a whole host of new ideas. Therefore, although we hear little from her at the Epilogue, Hannah is in fact the most changed. From her clothes, her demeanour she has embraced New York and her new ‘family’ in Prior, Louis and Belize. This Hannah stands strong alongside the boys she has befriended, still maternal- we still imagine her caring for Prior in her own way, in the way she couldn’t for her own Son. And while she’s ‘harder’ in her look of a ‘New Yorker’ she’s also softened, feeling like a woman who has accepted a new life and version of herself. Brown conveys this with a quiet confidence in which she inhabits the scene, often in the background, not vying for position or ‘air time’ or indeed Prior’s attention like Belize and Louis. A quiet constant presence and reassuring and assured but there is a shift, whereas before Brown gave Hannah an air of being slightly out of step with the world, the scene, she inhabits, now she occupies that space fully, confidently without having to shout. 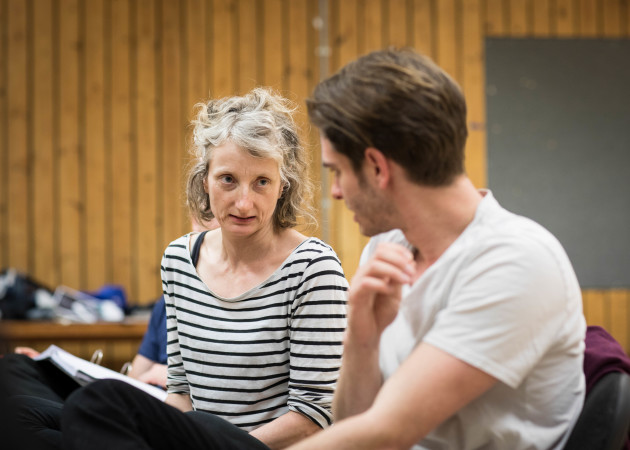 The Angel/Emily- Amanda Lawrence
Taking on the most altered of roles in this revival Amanda Lawrence must contend with not only being the strangest of Kushner’s characters, but also the puppetry and movement Elliot weaves into the character. It’s a big ask of any performance, but especially incorporating the strange and at times incomprehensible dialogue and motivations of the mysterious Angel.
As a counter to the Angel’s weirdness and majesty Lawrence also takes on the down-to-earth in every sense Nurse Emily. As Emily Lawrence offers quirky but real in contrast to her Angel’s quirky and out there (literally). She’s business like and gives a sense, under the witty one-liners, of the weight of her role as a nurse at the frontlines of the AIDS epidemic. She delivers the ‘You his uhh’ line to Louis for the first time with the level of insult that betrays- James McArdle playing off it perfectly, showing his hurt at not having a name for what he is. These are the levels to Nurse Emily that Lawrence begins to chip away at- she’s busy, pressured and knows what she’s talking about. The edge to some of her lines, when she has a ‘waiting room full’ conveys the stresses and strains of what she is undertaking. One step removed from the situation, unlike Belize who has personal investment, gives her a distance, a sharpness and a feeling she is fighting battles unseen as well.  Finally, when Prior returns ‘from the dead’ the happiness of Emily for her patient is a rare moment of respite for those caretakers of the Epidemic. 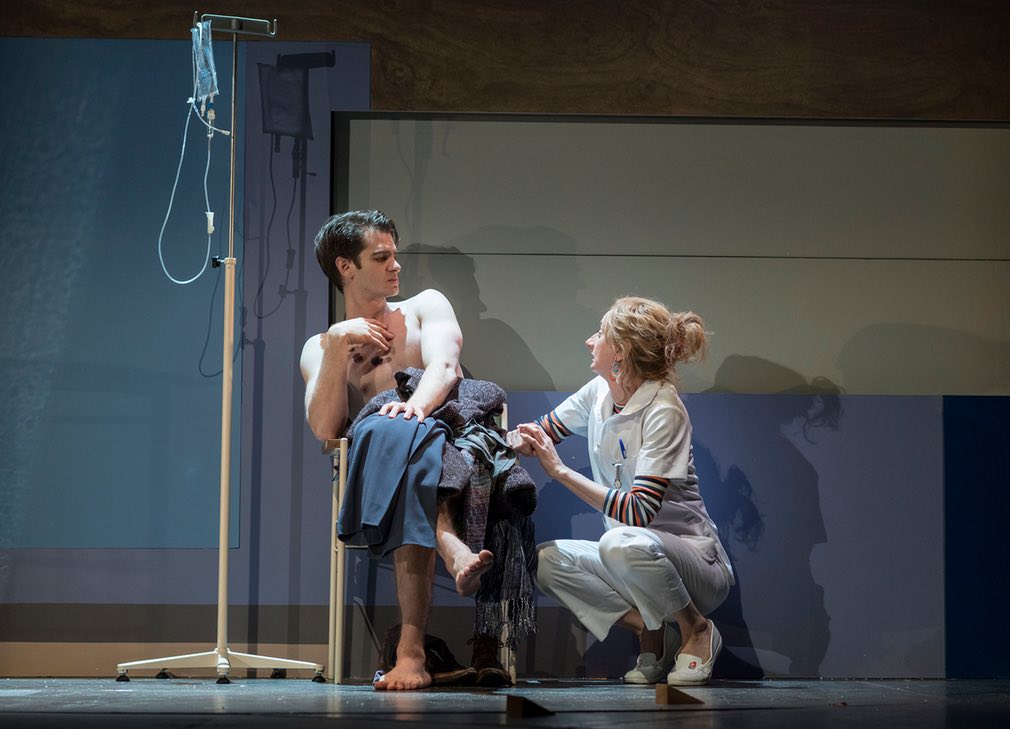 The key to Lawrence’s Angel is that she brings out the human in the mythical creature. The Angel is made of Prior, she’s part of him and a reflection of him, and though she is mythical and strange, she is also incredibly human. Lawrence’s Angel is quirky and funny, which gives her an endearing quality even while at the extremes of the in-compressible elements of her dialogue and performance. It would have been possible, in all the movement and puppetry, to lose elements of the Angel’s character, but Lawrence has a quirky style that permeates all the trappings of the Angel. It’s an element of the writing that’s often missed-if the Angel grows out of Prior, and Prior is generally a witty funny character, why isn’t the Angel? Lawrence finds that in her, and the campy elements of the Angel, reflect Prior’s campy humour- both use it as a defense and a weapon when needed, but both are also just funny creatures of the world. The Angel is also, in principle and action, a terrifying creature. We the audience respond as Prior does when she first arrives- in horror and fear. And while she is still an element to be feared, she is also something familiar, with humanity that Lawrence brings a warmth to. Amid all she does to Prior, there’s a feeling of loss and fear to the Angel herself.
Amid all the choreographed movement Lawrence has a quirky movement style that is all her own. To make it feel organic and authentic while giant wings and a team of ‘shadows’ propel you is a mark of the work that went into creating the Angel’s flight. It feels instead of her being winched in on a wire, as is usual, that this movement is natural- even though it is created in a ‘theatrical’ manner.
There’s reason, and thought behind every movement, from the way she towers over Prior through to the way she playfully nudges him forward with a wing in Heaven. There is a lovely moment in Heaven where stripped of the wings now Lawrence gets a moment as the Angel free from the choreography and her ‘Shadows’ and she delivers the Angel’s response to Prior with a heartfelt poetry that reminds the audience that under all the spectacle she has been doing some spectacular work as this enigmatic creature. Here Lawrence shows the audience how she has been mirroring Garfield’s Prior for the rest of the performance. As Prior has raged and fought against his illness so the Angel has been literally ‘sky high’ and fighting, so has she. Now they play a tennis match of line delivery, bouncing back and forth this final argument, but Lawrence- like Brown in a previous scene- mediates, or umpires the match giving Garfield something different to bounce off. In shifting her Angel, she shifts Prior, they mirror and ricochet and it works.