This piece was originally written for Wales Arts Review,  the full version can be found here. 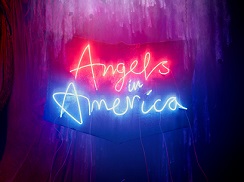 “History is about the crack wide open” warns the Angels to Prior Walter. And history, of Reagan, 80s America and AIDS is certainly on show for all to see in the National Theatre’s  revival of Angels in America. But why does a play about 1980s America, specifically the title might suggest Gay America resonate still? Is it now a play that is dated?  Is it a historical piece?

Set in 1985 and Addressing issues- from AIDS to Cold War Politics that have now receded into the past or given way to new concerns?  When viewed today parts of it seem terrifyingly current. Economic downturns? Extreme right wing political views taking hold? Fear of Russia? Vague but ever present threat of nuclear war? Impending environmental disaster? Granted, when the play was announced a year ago nobody could know we’d have an American President and British Prime Minister who genuinely longed to return to the days of Reagan and Thatcher, or that the threat of war with Russia or nuclear fear like the Cold War would enter our day to day lives again.

The announcement that Angels would be returning to the National Theatre in 2017, and next to Broadway in 2018 is more of a ‘homecoming’ than the subtitle ‘A Gay Fantasia on National Themes’ might suggest. The play in fact received its world premiere at premiered at the National Theatre in 1994, where by a quirk of logistical fate it opened ahead of its Broadway counterpart. It was a hit in the smaller Cottesloe space, and earned theatrical accolades on both sides of the Atlantic.

One of the most important and memorable pieces of new work the National has staged, it was no surprise it was included in their 50th Anniversary celebrations, or that Rufus Norris has chosen to revisit the play in his second year in charge of the theatre. This time including a starry cast including Andrew Garfield, Nathan Lane and Russell Tovey along with Olivier award winner, and all-round star of British theatre, Denise Gough. Combined with direction from Marianne Elliott, who has delivered some of the biggest hits for the National Theatre in recent years, this is not so much a homecoming then a triumphant return that looked to defy the previous production in scope and scale. More than this however, it is a sign of the significance of the play itself, that the NT has returned to the production on such a scale. Including it in the celebration of 50 years was an indication of its importance to theatrical history. It is also significant in it’s addressing of the AIDS crisis. 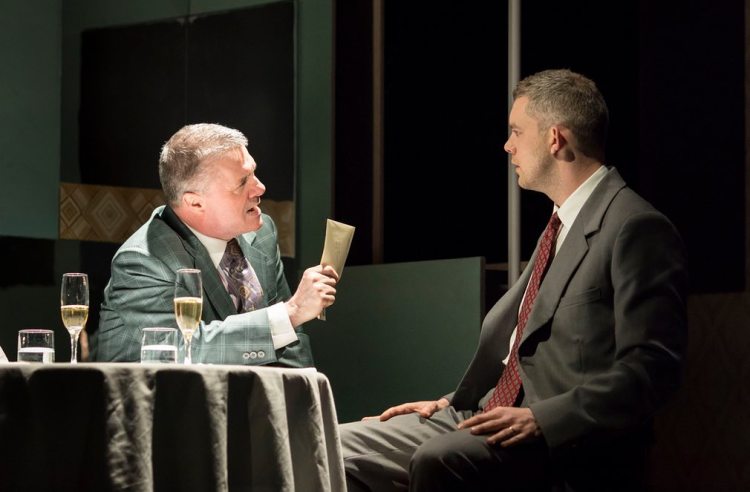 Kushner’s was one of a wide variety of theatrical works to tackle AIDS, but also the highest profile. His depiction of AIDS in the earliest years of the epidemic is brutal in both its depiction of characters succumbing to illness, but also in the wider impact on the lives of those affected by AIDS. In so doing, addressing  issues of what it meant to be a gay man in the 1980s; from Louis and Prior’s unapologetic openness to his closeted characters, Joe and Roy.

And while the production has gained attention for its star filled cast it truly is an ensemble piece. Susan Brown and Amanda Lawrence do a lot of the less glamourous but important work, sharing a variety of characters between them – not least in the case of Lawrence the Angel of the title which is a physical challenge as much as a performance one. Meanwhile, Brown notably as Hannah Pitt and Ethel Rosenberg becomes the focus of any scene she is in. Elsewhere Nathan Stewart- Jarret also steals many a laugh and indeed a scene from Nathan Lane with his own camp wit and sharp delivery. Stewart-Jarret shouldn’t be underestimated however as just the comic turn in ex-drag Queen and nurse Belize, as the friend of someone dying of AIDS, and the nurse to a foe he’d rather not treat, there’s a quiet depth to the performance beneath one liners and loud costumes.

The real heart of the piece, and the real challenge to the audience lies Prior, the insight into Kushner’s philosophical reflections yes, but also the heart of the paly as the man we watch succumbing to AIDS. The effect of this hinges largely on the performances of Andrew Garfield as Prior and James McArdle as Louis. Garfield quickly proves he is a natural Prior, balancing heart-breaking performance with a razor-sharp wit. McArdle’s understated but powerful performance as Louis is what really lifts this element of the narrative and the heart of the play.

Angels is both one play in two parts and two separate plays, and though both are written in the Brechtian Epic style it is Perestroika in which Elliott truly runs with this style. Millennium’s at times overly-staged format becomes instead a set up for the stripping back, and (almost literal) pulling the rug away from the audience in Part 2 until they are left with a virtually bare stage. This is by no means a simplistic staging and things veer from a piling up of debris on stage, to spectacular intricate moving set pieces, to of course the returning Angel of the title.

Perestroika is a theatrical piece, reliant on a director teasing out all the elements that lift it out of what can simply end up a wordy confusing mess without the right steer. Which Elliot manages admirably, particularly when viewed alongside Millennium. Although theatricality drives Perestroika it is not without its moments of honest emotional realism, and that is the gift that is this piece a challenging but rewarding veering between the two pulling the audience along with it.  It’s a confidence of a director to take things this far,  a confidence present in knowing when to return to the words of the playwright, and trust in the power of the actors. And it is with this the play ends. Stripped back staging as part of the wider metaphor yes, but also offer no distraction from the writing.

In doing a final battle with the Angel, Prior is released after demanding ‘More Life’ What that ‘More Life’ might mean is ultimately in the hands of the audience, and 25 years after the original naturally some of that meaning, and what is carried out may have changed. It was never about the specifics of the politics for Kushner- he was writing back to the Reagan era as Clinton was elected president. Like Louis in the play Kushner is concerned with the bigger picture, the idea again as Prior concludes ‘We will be citizens’. Grand yes, fitting with the scale of the piece certainly, and finally effective.

Angels in America transfers to Broadway from March 2018.