‘The World Only Spins Forward’

Someone said that to me last night, and that’s how I’m choosing to look at 2019.

I couldn’t bring myself to write a 2018 reflective post this year. It would have been a pointless exercise in melancholy and anger. And really what’s the point, when indeed, the world only spins forward.

2018 was a YEAR. Got fired for a tweet in January, but you lot dragged me through the sorry mess of the rest of it. And I am grateful. While you are fabulous creatures each and every one, there’s only one gif for this. Thank you all. pic.twitter.com/It9x84HhrN

In 2019 I intend to embrace my inner Prior Walter (despite being naturally a Louis Ironson) and be 10 times more fabulous. But most of all after 2018 I know I’m strong as hell and can take on whatever (heaven) throws at me. Just like Prior. pic.twitter.com/MtQBBmk1yu

And finally, as I was just reminded “The World Only Spins forward” and so, onto the next. Happy 2019 everyone. pic.twitter.com/qgHkZfHSGs

I plan to channel my inner Prior Walter, and go on fighting, rather than dwell on the past.

And out of all that, I have if nothing else a lot more inner strength. The last year didn’t break me. It doesn’t really matter who does or doesn’t like me, who is speaking to me, and who isn’t. Doesn’t mean it doesn’t hurt, but in the long term it doesn’t matter. It doesn’t matter that two crappy temp jobs didn’t work out. It doesn’t matter I’m not yet in a ‘proper job’ because I got this far.

Less talked about were the times my body tried to finish me off a bit. I talked finally here about my chronic illness, and a few times this year I thought I was heading towards a lot of the more serious consequence. But I escaped for now, and so onwards.

I don’t know if any of the creative projects I worked on in 2018 will see the light of day in 2019. And as much as at times it felt like a waste of time, endless frustration and ‘is it even worth it’ I still have learned something from each of them. So if something comes of any of them in 2019, 2020 or some indeterminate point in the future, it’s ok. I have learned something from the process, from the work itself, and none of it is a waste, none of it is lost.

Creatively I learned a lot about how to work, and the only way I will work going forward. That is openly, collaboratively and as an equal with others. I won’t take being made second fiddle, I won’t take my work or my time being under valued. I’ve been incredibly lucky with some true collaborative partnerships, which made me realise any other way just isn’t worth it.

Going forward I’ll also value my writing, my time to write. And I’ll protect it fiercely. My biggest mistake of 2018 was letting everyone else chip away at my writing time. Because society, even creative society doesn’t value writing in the way it should. Doesn’t value the time and space it takes to write. I can’t pull plays, or indeed a book out of my arse (well I can, and will but the pulling out takes time). I also let others tell me that chasing mythical jobs I didn’t want was more important than the writing that might get me where I want to go. Quitting to pursue a real job might come, it might come this year, but it’ll come on my terms when I’ve gone as far as I can go. And until then I’m saying ‘no, I’m writing’ as much as I want to. Or ‘No I’m working on the book/play/musical’ rather than saying yes to everything because I should.

And what of the book? well mainly it’s a set of muffled screams and my own fuck ups. But that’s ok. It’ll work out. As will the other projects on the go. I’ve come this far, waited this long. It’ll work out.

2018 was of course a bookmark in my ‘Angels in America’ chapter. Goodbyes, yes but some moving forward to the next. I was tidying up for New Year’s Day and found these two pictures, from Bethesda. The first from the first time I went there, before I knew this play. Before that place meant anything. And last summer, when it meant everything. 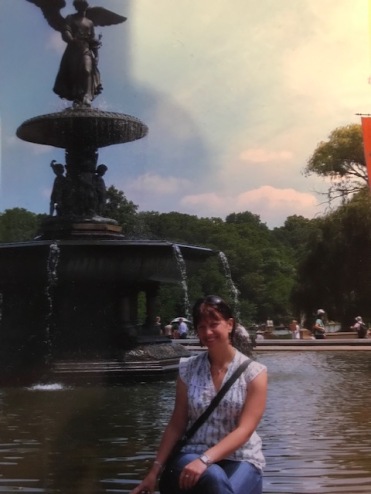 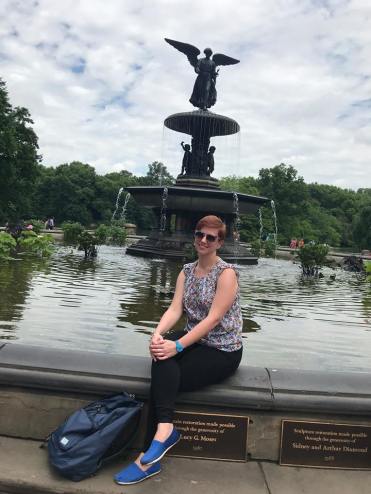 I get also that there are those who judge me for such focus on one play. And that’s ok, I know there’s more to me- and I know there will be more I have to offer. But I have to finish this first. And hey, if something never meant that much to you, maybe someday it will.

I’m disappearing into the book for a bit. Academic hat on (it’s floppy, it’s the only reason to do a PhD). But no matter how much the theatre community tries to tell me that means otherwise, I’m no less a playwright for that either. I’m no less a part of your world, not less a part of the academic world when I pick up my playwright hat (it has sequins). And if I put either down to earn a living, I’m no less either.

2018 taught me many things, but the main one was indeed ‘the world only spins forward’ so let’s keep spinning forward.