Skip to content
‘Chasing the music, trying to get home’
Touring the UK once again, the production remains at West End quality. And for fans of the show, or the Four Seasons, the blend of the hits, and the story of the band will be a real treat. But it’s important to remember Jersey Boys is more than just a stringing together of hits on stage. It’s an impeccably crafted musical.
Jersey Boys isn’t just a classic of the Jukebox biopic musical, it is by now a masterclass in how it’s done. Taking after The Buddy Holly Story, which really introduced the genre, Jersey Boys offers the increasingly rare thing in the jukebox genre; a use of the band’s music to tell an effective story, but one which understands the musical theatre format.
Narratively it’s a satisfying biopic of a musical. Taking the audience from the early days in Jersey, through to success, stardom and the bumps in the road along the way. It doesn’t try and get bogged down in details, and likely Valli fans can fill in the blanks themselves. Structurally a niggle still remains that the first act has three endings before it actually ends. Logically ending on the crux of stardom with ‘Sherri’ would seem the best fit, but the story endures a little longer to hit on Tommy’s money issues and ends on that note. The only time the mix of the band performing, and the narrative seem at odds- musically, and narratively, the first act ends on a whimper not a bang. But the balance is restored in Act 2 and once again the story balances narrative and performance admirably. We get a glimpse of the band’s ‘big moments’ -from TV to returning ‘home’ to perform, and it of course all ends on a high with the Rock and Roll hall of Fame.
The narrative structure of Jersey Boys, as well as the performances it commands is what makes it so commendable an example of the genre. The Four Seasons’ songs are used, interwoven in the narrative- mostly in chronological order- to tell the story of the band. But cleverly the documentary format it’s presented in early on, is turned on it’s head when other members of the band take over narration. It is in fact a Rashomon effect musical- the same story re-told with contradictory versions from every person involved. Midway through it becomes apparent that the story woven to this point is one of four, and from that point on, the rest of the band interject, their narrative competing, overlapping and leaving audiences to make up their own mind. It’s deceptively simple to think of Jersey Boys as simply a ‘jukebox musical’ in the most basic format, and it’s a testament to book writers Rick Elice and Marshall Brickman, who weave the stories, and the music together. Jersey Boys is far more than stringing the hits of a band together and putting them on stage and remains the gold standard of the genre for this.
The performances this requires are incredible, and the current cast rise to this admirably. Not only do they have to do a standard musical performance, but they have to perform within a performance, and sing in the kind of close harmonies that took the Four Seasons themselves years to master. It’s a huge sing every night not just for Michael Watson playing Valli, but the often under-appreciated role of the other four who create the harmonies that make up the Four Seasons’ sound. And as the above suggests, the performance requirements of Jersey Boys are also no easy ride. Not only are the actors playing a real person, with all the baggage and expectation that comes with that, but they balance performance within performance alongside some intricate storytelling.  Simon Bailey as Tommy DeVito is a master at all three. From the opening scenes, he has Tommy’s charisma and engagement, pulling the audience into the story, raising the laughs and with a vocal performance to match. DeVito really anchors the story and Bailey really balances the charm with the ego that was his downfall. Michael Watson as Valli does the best thing an actor can do in that role- he creates his own version of Valli without impersonating him. His vocals are exceptional, and his performance makes Valli an affable, engaging character, with a real element of heart. Declan Egan and Lewis Griffiths round out the group and each of them puts their own mark on the performance- and again give vocal performances that are not to be underestimated. Egan has a nerdish charm as Guardio, and a dry delivery that makes him an entertaining watch and actually the band member you find yourself rooting for more. Griffiths equally gives Nicky a humour that endears him despite perhaps having less to do as the ‘Ringo’ of the group, he makes his mark. None of the performances- from the Four Seasons to the hard-working ensemble, to the band, should be underestimated. From the close harmony vocals to the precise band choreography, Jersey Boys is still a tightly woven, and easy to underestimate performance. And this tour cast truly rise to the challenge. 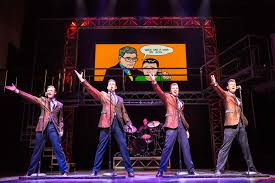 And what is it about Jersey Boys that makes it such a classic, so relatively early in its life (it turns 13 this year). As the musical says, it’s their fans. Both of the Four Seasons and the musical itself now perhaps. The Four Seasons suffered, as the musical tells us. They weren’t the Beatles, and they got less press, less TV, less fame because of who they were and where they came from. But their fans, their fans loved them. And their fans were the working-class people who came from the same neighbourhoods. And while Bob Guardio might not give a fuck about the old neighbourhood (as he says in the post-script) it’s the old neighbourhood that made the Four Seasons. And Jersey Boys? It does an odd thing for a musical, it has a hard-core group of musical theatre fans who have followed the show for years. Who love its music and the almost perfectly crafted example of the genre it offers, they love its actors, and the performances? Meanwhile, on tour, in London and still in New York, Jersey Boys attracts the crowd the Four Seasons perhaps did- those who don’t make a habit of musical watching, but those who remember ‘Sherri’ or ‘Big Girls Don’t Cry’. A true crossover hit, Jersey Boys is a fascinating example of what Jukebox Musicals can and should be.
Moreover, it’s still just a great night out at the theatre. 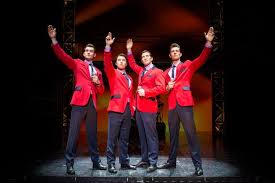 Star Rating: ****
Wales Millennium Centre until 26th January touring nationwide.
WMC tickets available here
Tour information here
Epilogue
Yes I’m still loving these, and it’s my blog, I get to do what I like.
So Jersey Boys…not what perhaps, if you know me, you’d think was my usual taste? Turns out I have a lot of love for the four guys under a streetlamp.
I first saw Jersey Boys in San Francisco on the first stop of it’s first National Tour. I was on holiday and did the usual thing of seeing whatever was playing. I’d never heard Frankie Valli sing (to my knowledge) and let me tell you I had the shock of my life…but I was charmed by the musical then. And years later having spent another decade studying musicals I really appreciate what it does. This blog turned into a mini essay that may well turn into something more. The Buddy Holly Story is another obsession of mine musically, and that genre that began there, of telling a musician’s story through their songs on stage is of endless fascination (I’m a lover of biography).
Moreover I love close harmony groups and Jersey Boys in that respect is utterly my crack. Do you know how hard that is to sing? It’s HARD and those boys do it as a group while performing as musical theatre actors. And that still blows my mind every time.
So it turns out I’m a Jersey Boys stan. I will die on this particular hill of musical theatre, and turns out I have a lot more thoughts than I thought on The Old Neighbourhood.