Sylvia, is, without doubt, the character who talks most sense in Laura Wade’s Home I’m Darling. Mother of Judy, who is living what Sylvia calls a ‘cartoon’ of a 1950s life, having dropped out of the working world to be a housewife, Sylvia despairs of her daughter’s choice. But should we as feminist support Judy’s choice? Or is the dark secret of many a 30-something watching Home I’m Darling, that actually there are bits of Judy’s ‘cartoon 1950s life’ that look quite enviable, or that we ourselves have entertained.
It is, Sylvia reminds her, not what generations before fought for. And that’s the conflict as a 30-something woman watching Home I’m Darling. Every feminist instinct calls me to side with Sylvia, shout at Judy she’s wasting her life, and what women fought-no fight for. But there’s a side of me that also empathises, even envies Judy’s choice. Her position.  And yes, ok her wardrobe.

Let’s start with the wardrobe. I felt the need to qualify ‘it’s not about the frocks but…’ to commentary on the enviable wardrobe Katherine Parkinson has in the play. And yet, surely freedom to wear pretty dresses is part of the point- if that’s what women want to do. Of course, Judy takes it to an extreme, while I pair my 50s frocks (of which I have many) with Converse or boots, hers is the whole hog- stockings and tights and all. Which feels like, appropriately more a male fantasy or a play costume than ‘real’ clothes. Of course, for Judy it’s an illusion, as Sylvia reminds her it was freezing in them in the 50s. Impractical, and no fun. And women fought for ‘better’ for choice. But of course, Judy has chosen them, and even if she does go to the extreme, if it makes her feel better about herself, her life then it is unequivocally the unfeminist thing to do to criticise that. Like everything a woman wears, even today, it’s a costume signifying something else.  Something she wants us to think of her, rather than something she is. But how much do we as women do that every day still? How much do I be sure to be ‘feminine’ to counteract my short hair? How many times has a colleague commented on my ‘short’ skirt or whether I wear trousers in the last year? Suddenly the 50s frocks don’t seem so far away.

Though as much as I like a frock it seems an awful waste to just use them to clean the house in, and an awful lot of effort. And that’s the crux of the contemporary battle in ‘Home I’m Darling’ that ‘just’ of being in the house, of taking care of the home, and whether it’s a waste, or whether it’s just one woman’s right to choose?
Let’s start by saying it wouldn’t even be a discussion if Wade had given her children. Or rather it would be a different discussion. A woman who chooses to stay home or not with her children of course faces challenges. As director Tamara Harvey documented in her #WorkingMum while directing this play. But Wade’s decision not to give Judy children is a powerful one. Sylvia’s comment ‘If you had children, I’d understand it’ encompasses much- it is acceptable for a woman to stop, to drop out of career, stay at home, if and only if she has children. Because despite generations of feminism, the sad truth is no woman is judged more harshly by other women than on her decision about children.

Children or not, there is something about Judy’s spending her time maintaining the home and think, it’s tempting. Who, in climbing, mostly sliding down or clinging to the rockface that is career progression, hasn’t thought ‘I wish I could stop?’ Because it is hard for women still. From being paid less, being promoted less, working harder to get less. To the engrained sexism- overt sexism, sexual harassment. The idea of wanting to ‘drop out’ makes me feel like (more) of a failure of a woman- not managing, not coping with having it all, but also wouldn’t the idea of being utterly oblivious to all that in a ‘cartoon bubble’ be tempting?
That is, I confess the one element of Judy’s choice I can’t wrap my head around. That, aside from shopping on ebay, she entirely cuts herself off from the modern world. She’s vaguely aware of ‘The Baking Show’ but asks ‘where has Castro gone?’. As much as anyone would like to silence the 24-hour news cycle occasionally, there’s a sense of the power of information in our modern world. And powerlessness as a woman without it. The idea that there’s still so much to shout about, fight for, makes ‘dropping out’ of society actually the element I pass judgement on Judy for the most. Feminism is exercising choice yes, supporting choice. But it’s also continuing the fight. And you can’t do that if you cut yourself off from the world.
It’s perhaps Judy’s being cut off from the world that makes the ‘Me Too’ moment of the play what it is. Feeling a little out of step- a little out of date-with how women are speaking of these moments, are challenging men, and even the conversations we have around sexual harassment. So, when she finds herself receiving, and then pandering to, Marcus’ sexual exploits, it’s a troubling double-edge sword to listen to. Because find me a woman who hasn’t had a man describe in detail the sexual things, he wants to do to her- and to other women- and hasn’t stopped him. Because, either she kind of liked him, because ‘cool’ girls do that or more likely, because he holds some power, because we’re raised not to make a fuss. We abhor what he does, but understand her reaction, empathise with it. Similarly, when she offers herself to Marcus, offers herself to his fantasies, for money. The revulsion yes, but that glimmer of ‘would I?’ or even ‘have I?’. is it really any worse than all the pretending, all the pandering to men that I’ve done otherwise in my life and career? If the battle is far from won and I still have to play the game…how far can I go? More importantly, if I needed that money, would I? could I?
It is that moment in the play that shows the cracks for what Judy’s life is- or has become- a somewhat broken woman clinging onto whatever she can to try and fix herself. And the most feminist response to this play, is actually to want her to do that. it’s clear by the end of the play it’s born out of her own mental ill health, and actually that’s a more important statement by Wade- even if it goes somewhat unresolved. Mental health is equally a feminist issue, and the pressures of women in the ‘modern’ world and the impact on our mental health- the push to be everything at once, to maintain a career and a perfect home, oh and if we could create a perfect family while we’re at it, oh and cater to men’s desires of all kinds still, then that would be great. What Judy does almost feels like giving in to that in its own way, if you can’t beat ‘em join ‘em. But in Wade’s beautifully written, at times hilarious and always charming, Judy’s need to slip into a different time is born of some deeper-rooted issues. And the only feminist, the only expression of womanhood- of sisterhood- in that is to want to help her get better. At first 50s frocks help, but when they don’t, you do want someone to talk some sense, and get her some help, and not to judge her for that. 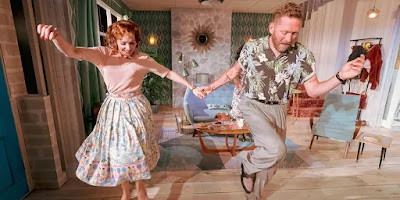 I want desperately to support Judy’s right to stay at home and clean. To dress up in a time capsule wardrobe. And there’s elements of her life- the single car family, walking to the shops, the waste-free, cook from scratch lifestyle that actually is desirable, even fashionable now. More than that I look at the play and see in principle, as a feminist I should support her right to choose. But like Sylvia, I can’t quite reconcile that with what Judy does, I want her to be everything she could be. I don’t want her to be, as Sylvia says of her own Mother, asking ‘what have I done really?’ because we know in Sylvia’s case she’s hiding from a world that has beaten her down once too often. And every woman watching it will understand that. Because it does take a bit of bravery for women in the modern world. Some days it would be easier to stay home and clean behind things. And that’s what Wade’s play hits on so eloquently- there are times when we’ve all wished for what Judy does- an escape. Whether it’s 1950s nostalgia or a desert island. Because the hard truth is that yes, it’s still harder for women.

It’s ok to do a Judy sometimes, for a bit and retreat. But only if you get back up again because did the women of Sylvia’s generation want to be on the marches AND going home to cook the dinner and keep the house? No, but they did it. So, we could be, in her words ‘so you could be brave and strong and better’ Because as it turns out we’re not done marching yet either, we’re not done making things better yet. We can do it in whatever frock we want, but we’d better keep doing it. To stop the Marcuses of the world, and to make sure less and less women want to hide away in their cartoon bubble. Because as Sylvia -ever the voice of reason- says ‘it’s ridiculous being nostalgic when you weren’t even there’