Skip to content
And so it is that time of year, the yearly round-up. I did a round up of new Welsh theatre for Nation Cymru which is here so to save duplication- and give space to the many brilliant things seen this year, here is the best of things from elsewhere.

Divided arbitrarily into musicals and plays, and in no particular order…

Waitress
It’s one that’s divided London theatre fans admittedly, and with a few missteps on the casting and marketing front it’s easy to see why. But beyond that, there’s such beauty in the pie shop. There’s also beauty in having a musical with an all female creative team sitting proudly in London. And for us Smash fans the chance to see Karen Cartwright, sorry Katherine McPhee, sorry Katherine Foster. Anyway go and see Lucie Jones she’s ace. But the pie-musical is one full of heart. Full of flawed characters. For me also it was one I’d spent a good few months writing to, particularly ‘You Matter to Me’ and ‘She Used to Be Mine’ and sometimes music becomes a particular soundtrack to a particular moment, and that makes a show special. Also hell, the theatre smells like pie…Les Mis can’t say that can it?
More on Waitress here.

Percy Jackson
I spent Thanksgiving with the Half-Bloods this year, and honestly, it’s the most fun you can have while being covered in toilet paper (shout out to the usher who moved us to the front row for that). I know nothing about the Percy Jackson books, being about 20 years too old for them. But I do know a glorious fun new musical that could when I see one. This show has been plugging along out of town on tour for several years, it’s been workshopped and restaged, and finally landed on Broadway. It’s a simple show with a small cast and minimal props, it’s music is Broadway pop/rock fusion, and yes the look and feel is a bit ‘Rent but make it supernatural with less AIDS’ but I adored it. And so did the kids in the audience- I’ve never seen young audiences so transfixed. This musical is sweet, has a good story, has a good message…and above all it’s fun. Not everything has to be Sondheim to have cultural value. In fact transfixing young people, and making older ones remember being TP’d by a Demi God is more than enough for me.

Oklahoma!
‘Sexy Oklahoma!’ as it is billed…and they ain’t wrong. The last night of my recent trip to New York and this was exactly what I needed- a reinvention of a classic, one that throws out the rules but somehow keeps the essence of the thing. And yes, is a little bit hot under the collar too. I freely admit the Rogers and Hammerstein aren’t top of my list, their style generally not being my thing. But this version, with its gorgeous orchestrations brought the music alive. And all jokes about the sexy cast aside, also stripped back and reworked the story into something that felt gloriously, and urgently contemporary.

Come From Away
I’ve already written and tweeted many many words on this show this year. It was my most listened to Spotify album. It’s also a brilliantly crafted piece of musical theatre- achieving so much with so little, it’s all in the performances, and in the writing. It’s impeccable in its economy of storytelling- cramming so much into a short piece, without overloading the audience. It tells us stories that are important, through music that is beautiful and funny all at once. Sometimes a piece just reaches out and touches not just the heart but the soul of you. For many of us who remember 9/11 it’s a way of catharsis, of processing that part of our lives- before and after are different for anyone who lived through that day even if they had no personal part of it. And Come From Away helps make it personal, but also helps us to see the hope in our all too dark world. And we need that. We need the humanity and heart of Come From Away. Maybe we just need to sit in a room full of strangers and cry. And to come out feeling hopeful.
More thoughts on Come from Away (many more) here

Falsettos
Speaking of sitting in a room and crying with strangers…although this list isn’t ranked, Falsettos was without a doubt my show of the year. These things aren’t actually about the ‘best’ things we saw, but the things that speak to us, that mean something. And this musical, but in particular this production will always mean something special to me. There is something I cannot explain about why this piece, above all the ‘AIDS theatre’ I’ve watched, and researched, reduces me to a sobbing wreck. But what this production did was give me a new version of something I thought I knew. Every time I saw it I felt like I was uncovering new layers. And to see and feel the passion of everyone making it (and to be a tiny part of that as well) was another of those theatrical moments that gave me the spark to keep doing in what I do.
For longer pieces on Falsettos here  and here
The plays….

Emilia
Sometimes…you just need to burn the whole fucking house down. And lord knows if that wasn’t a ‘mood’ (as the kids say) at the start of the year when I saw this, it is now. More than that Morgan Lloyd-Malcolm’s play was a rallying cry, a roof-raising shout of anger. It was a production so very full of heart too, from everyone involved. And a firm believer in theatre doesn’t stop on the stage Morgan’s supportive nature, elevating women’s voices and supporting them is equally a beacon of hope in dark times.
For more on Emilia here. 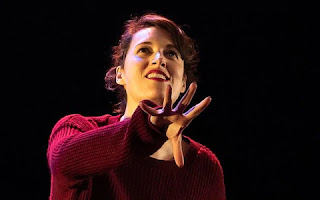 Fleabag
Am I a basic theatre bitch for this one? Yes. Was it also something that more than lived up to the hype? Also, yes. As a latecomer to Fleabag (Season 2, Hot Priest bandwagon person…) of course I along with every 30-something white woman in the country was worshipping at the Alter of Phoebe. While Fleabag has gained many imitators and meant every female playwright must now be compared to it, seeing Fleabag in its original form really did justify why Waller-Bridge has become the phenomenon she has. It’s a meticulously executed beautiful piece of writing. The command of the performance alongside what is frankly an utterly stonking piece of writing made every person in the audience feel as if she was talking to them. I do still feel personally attacked by the line about speaking like it’s a stand-up routine though…

A Bright Room Called Day
Only Tony Kushner could answer criticisms about his work by being more Tony Kushner. In this rewritten version of his first play Kushner essentially says ‘hold my beer’ to anyone who says it was too…well Kushner to begin with. It’s not for everyone, and yes it’s far too long (as my dear Mother, whose family holidays have now been blighted by Kushner two years running will attest). But did it make all the lights in my brain go on? Did it make me want to strip away the layers of Kushner onion? Did it make me excited and remember what I loved about this writer, about theatre? Did it make me more scared of Poodles? All of this.

Seared
There is something to be said for a well-made play. And Seared taking on the classic ‘one room’ set up is exactly that: a well-made play filled with rounded interesting characters. It’s a joy in a theatrical world where everything has to be ‘innovative’ and ‘groundbreaking’ to remember why a lot of us got into this game: stories. And seeing stories unfold, with brilliant dialogue, performed brilliantly is not only enough, it’s what it’s about (for me at least). And so I loved Seared. More of this sort of thing. (And more cooking on stage, I live for chaos)

Death of a Salesman
Speaking of a ‘well-made play’ and ‘ground-breaking’ this is how you make that happen, without bells and whistles, but still create something utterly remarkable. Marianne Elliott and Miranda Cromwell once again shows what rewriting the rules should look like. In one switch- making the Loman family Black- and without changing a word, Salesman gets a total reinvention. Again, the power of performances, a well-made play (one of the very best) and top-notch direction creates.
Honourable mentions in the ‘It’s a bit mad but I sort of loved it’ category this year:

Peter Gynt, National Theatre.
Firstly, let’s not pretend I would have sat through nearly 4 hours of this if it weren’t for James McArdle. Secondly, let’s not pretend it was really only made bearable by James McArdle. But I also sort of don’t mind? The execution was not, shall we say brilliant, but the ambition is to be applauded. Only really the NT can get away with experiments of this scale, and this was shall we say and experiment. I would however still like to sit Peter Hall down and explain to him how computers and internet banking work.

All About Eve
And the award for \’I wanted to love it so much but…\’ goes to \’All About Eve\’ (this category better named perhaps the \’what the fuck Ivo this time\’ award) I happen to think Ivo van Hove is a genius. I happen to think Gillian Anderson is one of the best actresses of her generation. Somehow though this didn\’t work. Mainly because I think Ivo can\’t quite decide what he\’s directing for here- film or theatre. But am I glad to have seen it? but of course. Will I see another Ivo production? I can\’t stay away (I am a fool). But as Gillian brought me to the theatre, I\’m always grateful for a chance to see her and her 6-inch heels. More thoughts here.
And again no particular order performances of the year….
Rachel Tucker- Come from Away
Phoebe Waller-Bridge- Fleabag
Susan Brown- Home I\’m Darling
Sharon D Clarke- Death of a Salesman
Gillian Anderson- All About Eve
James McArdle- Peter Gynt
Raule Esparza- Seared
Daniel Boys- Falsettos
Damon Duano- Oklahoma!
Chris McCarrell- Percy Jackson
And that was 2019. There were some fantastic productions, most of which I didn\’t manage to see…but of what I did manage, this is a snapshot, the things that stuck. I managed to see about 65 performances, which for some is excessive for others slacking, so it\’s my snapshot.
And onwards to a new decade of theatre.