Skip to content
So on looking at my spreadsheet (yes of course there\’s a spreadsheet) of the decade, I saw 428 shows that I recorded. Foolish me did not record the shows that I saw while ushering at two theatres over three years. We\’ll call that 20 more shows I saw in that time (and to allow for others I know I\’ve missed) and so we\’re looking at 450 shows give or take this decade.
I started this blog (the previous incarnation of it) in 2011. My PhD supervisors tried to stop me from having a blog, but writing here has led to lots more opportunities over the past decade, so it\’s worth marking that.
I\’ve got a top 10 musicals and top 10 plays, but in going through I realised there were a few highlights that won\’t make the top cut…but are worthy of note. And so…year by year here we go.

2010
Holding the Man-Tommy Murphy- Trafalgar Studios
This book is one of my favourites ever, and as I was just beginning my PhD on AIDS theatre, this was a significant one this decade.
Hair- Gerome Ragni and James Rado- Gielguld Theatre
I danced with Hippies on stage (those damn Hippies get everywhere) and finally seeing this great American musical in London again was a joy.

2011
La Cage Aux Folles- Jerry Herman/Harvey Fierstein
This is a classic of a musical, and a joy of one. And sometimes John Barrowman in drag comes along when you need it to lift an otherwise drab year.
War Horse-Nick Stafford/Michael Morpurgo New London
You never forget your first Joey right? I spent the next 3 years arguing with my PhD supervisor over it. 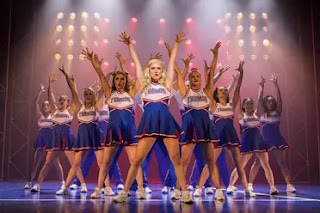 2013
This House- James Graham- NT Olivier
Look when Graham gets it right he really gets it right ok? Also when the NT do immersive properly, or audience interaction properly they nail it too. T
Merrily We Roll Along- Stephen Sondheim- Comedy Theatre
Jenna Russell and Sondheim are like music to my ears. And this was bittersweet and beautiful.

2014
The Crucible- Arthur Miller- The Old Vic
Richard Armitage was a powerhouse in this. Otherwise a just sold production of an incredible play. That apparently I still have memorised from school.
My Night With Reg- Kevin Elyot- Donmar Warehouse
A play I’d longed to see as the only ‘British AIDS play’ (it’s niche). Honourable mention to Mr Julian Ovenden. Ahem.

2015
Meet Fred- Hijinx Theatre
Look I love me a filthy puppet ok? And this show was innovative, challenging and all round brilliant.
Hello/Goodbye- Peter Souter- Hampstead Theatre
A sweet little play that probably didn’t light everyone’s world on fire, but I adore a well told relationship drama and this was brilliantly executed. And Shaun Evans will never cease to be a delight to watch.

2016
The Dazzle-Richard Greenberg Found 111
Andrew Scott giving a typical tour de force performance in the attic of an abandoned shop.
A Good Clean Heart-Alun Saunders- WMC Weston Studio
Alun Saunders debut play is a sweet one of love, lost and family. It’s also one that leaves its mark long after you’ve left it.

2017
The Busy World is Hushed-Keith Bunin-  Finborough Theatre
Sometimes you see the play you need to see at the time you need to see it. And something in this study of grief and love hit me at the right time.
Yank! -David Zellnick/Joseph Zellnick- Charing Cross Theatre
This musical about gay American soldiers in World War 2 is more joyous than the subject matter might indicate. Also, obviously heart wrenching.

2018
10 Plagues- Mark Ravenhill- Sherman Theatre
Just some intricate, brilliant storytelling around how we think of illness. Basically my total bag.
Unexploded Ordnances Split Britches- WMC
I’ve fangirled Split Britches from afar for years, so to see them was incredible. To have them call my review ‘one of our favourites’ was brilliant.

2019
Percy Jackson- Joe Tracz and Rob Rokicki- Longacre Theatre NY.
Sometimes you need a demi-God covering you in toilet paper. And also a musical for young people reminding you theatre is fun.
Seared- Theresa Rebeck- MCC Theatre
There’s a reason she’s the most produced female playwright on Broadway…a well-made play is a well-made play. And this was simply a well-made piece of dramatic storytelling.
So that\’s a decade year by year…of course what would a round up be without the \’top 10s\’ …